Special character of banking sector and high competitiveness in this field presupposes opening new banks’ subdivisions and market development of new regions. On paper, subsidiaries and agencies network extension is one of the most important methods of promoting one’s products and services. How does in happen in reality? InfoMarket Business News Agency has undertaken a task to examine the situation in this area and to gather information about how classic points of banking services selling and customers support are presented by banks of Moldova in its localities. A ranking of largest networks of banks and a ranking of localities by the number of objects of banking system have been made on the ground of information presented by banks at the request of InfoMarket. Agencies, subsidiaries and automatic teller machines (ATMs) are reviewed in the research. We have also taken into account that some headquarters are rendering assistance to their clients too.

As provided by the law in force, a subsidiary is a subdivision of a parent bank and is authorized to perform all operations and services offered by it. An agency is a subdivision of bank directly subordinated to it but performing a limited number of banking operations, such as deposits attracting, savings accounts opening, currency exchange, funds transfers, utility services payments, national and international payments, etc. For example, an agency is not authorized to decide on issuing credits to clients; this is the right of subsidiaries.
Of course, as the POS-terminals networks and online services develop, the access to banking services has become much wider. For example, according the findings of the National Bank of Moldova, as of the end of September, over 885,8  thou. of plastic cards have been in circulation, and a network bank cards are accepted in have amounted to 8650 special devices. In particular, 118 imprinters, 818 ATMs and 7714 POS-terminals (mainly in retail store chains to simplify the payments by plastic cards) are operating in the country. This list includes ATMs only, but the study does not claim to be exhaustive in researching access to banking services and effectiveness of banking networks.
So, at present, 15 commercial banks of the state are operating in 37 cities of Moldova (of which 35 are regional centers) where 2039 points of customers support are functioning.
Taking into account some banks headquarters which are rendering services to customers too, the network of selling banking services to individuals and legal entities amounts to 2046 objects and comprises 316 subsidiariesв, 915 agencies, 808 ATMs  and 7 banks headquarters.
The largest network of services among commercial banks is supported by Banca de Economii and comprises 676 objects, including 37 subsidiaries, 538 agencies and 101 ATM. Customers are not served by its headquarters. Banca de Economii is one of the few banks which is presented and serve customers in all regional centers of the country
Another bank, Moldova Agroindbank, may also boast its extensive “coverage”. Being the third in the ranking (225 objects), it is a leader by the number of subsidiaries (which are opened in all 37 cities of Moldova) and ATMs (136).
Victoriabank, which is the second in the ranking, has opened 235 customers support points. Alongside with Moldova Agroindbank, it is a leader by the number of ATMs (136), but goes far behind  Banca de Economii by the number of established agencies (67) and behind Moldova Agroindbank by the number of subsidiaries (32).
The file closer is Universalbank. Moreover, taking into account the situation in this bank, it would be quite logical to exclude at all its headquarters, the only point of sale were customers are served, from the ranking of centers of banking services of the country.
The most modest network belongs to Comertbank, which is last but one in the ranking: it possesses 13 commercial objects, including the subsidiary in Chisinau, 6 agencies and 5 ATMs. Customers are also served in its headquarters.
The Largest Networks of Banks of Moldova
Source: the information is provided by the banks at the request of InfoMarket.
Banks Shares in the Networks of Banks of Moldova
(Subsidiaries, Agencies, Headquarters Serving Customers and ATMs) 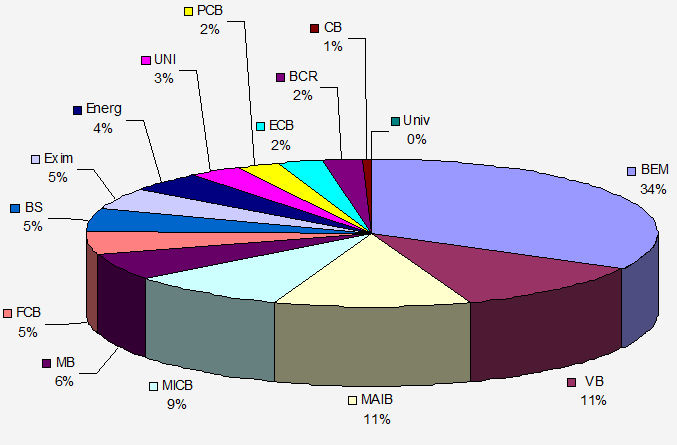 Banks Shares in the Networks of Banks of Moldova
(Subsidiaries, Agencies and Headquarters Serving Customers) 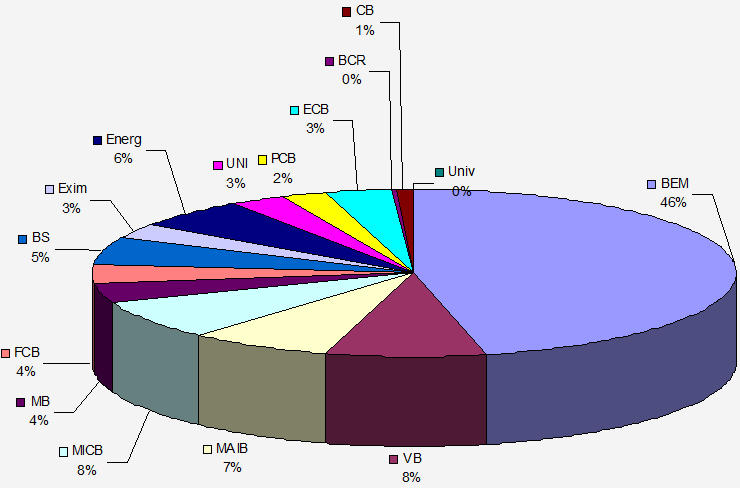 Banks Shares at the ATMs Market 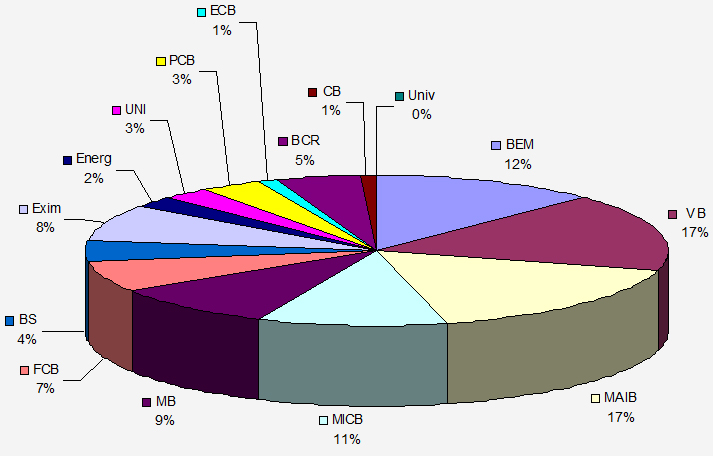 How are banking services represented in regions of Moldova? In general, they are uneven and depend on common development of a region, business activity and population size. As we have already mentioned, leaders by their representation in regions are Banca de Economii and Moldova Agroindbank, with the rest banks being poorly represented.
Almost 40% of banks offices are concentrated in the capital. Chisinau is home for 808 points of customer support which comprise 117 subsidiaries, 221 agencies, 463 ATMs and 7 headquarters serving customers.
“Capitals” of the North and South of Moldova, which are ranked the second and the third respectively by the number of points of banking services, comprise the much less number of subsidiaries, agencies and ATMs than the capital does: 130 objects are opened in Balti and 82 ones are operating in Cahul. Comrat, capital of Gagauzia, is the 8th with 51 objects.
The ten regions most advanced by banks objects are Soroca (66 objects and the 4th rank); Orhei (66/4th ); Ungheni (56/6th ); Edineti (53/7th ); Briceni (47/9th ) and Hincesti 947/10th ). The list is closed by cities of Glodeni (10 points of banking selling), Nisporeni (10) and Dubasari (5). The rest regions are represented by 14 to 45 of customers support objects.
In general, agencies, ATMs and subsidiaries are represented in all regional centers
Localities of Moldova by the Number of Objects of Banking Services
Source: the information is provided by the banks at the request of InfoMarket.
Subsidiaries, Agencies and ATMs of Commercial Banks of Moldova
Source: the information is provided by the banks at the request of InfoMarket.