In order to progress, the economy must undergo a crisis approximately every 10 years. This is not just an observation, this is already a regularity, at least in respect of the United States. And, since the United States is one of the strongest economies, and its dollar is one of the global currencies, the situation in this country is often projected onto the world economy. We went through economic crises in 1998, 2007-2009, and now again. The causes of all crises are different, and they begin in different ways, but in one way or another, they affect almost all countries. And the more developed a country is, the more the crisis hits it, and the faster it gets out of it.

Independent Moldova turns 30 this year. Like other economies, we felt the blows of the global crises; however, we have experienced these crises in our own way and, as a rule, a year later. Nevertheless, we also have our own cyclical nature of political and economic events closely related in our conditions. Unfortunately, with an illiterate approach, this can entail very unpleasant consequences for the economy and citizens of our country.

T-bills have a maturity of up to one year (91-day T-bills, 184-day T-bills, 364-day T-bills). Their profitability is determined by the market on the basis of supply and demand and can be "coordinated" by the Ministry of Finance by reducing or increasing supply. Interest is paid upon maturity.

The GS market is closely related to the political and economic cyclical nature of the Moldovan crises. But the main thing here is not to play too much. And there are good examples of this in our history.

President Vladimir Voronin was the first politician to draw attention to the government securities market in 2000. In the first four years of his presidency, Moldova did not have a program with the International Monetary Fund, which means no external funding. Besides the fact that Voronin came to power while being the head of the Party of Communists (which was an unpleasant fact for Western partners), the IMF insisted on very dubious demands (from the current perspective), such as the privatization of Cricova winery. I don't even dare to think what would have happened there if Voronin agreed. But under his rule, the plant was "insured" - it was acknowledged as a national treasure.

So, the first four years of governance - 2000-2004 - under the presidency of Vladimir Voronin, Moldova got along without external funding. Without a program with the IMF, not a single international institutional investor would come to the country. Moldova had to look for internal reserves. Attention was drawn to the fact that some of the needs of the state budget could be financed through the sale of government securities, and their sales volume in those years increased threefold compared to the late 1990s. This is perhaps a good example of competent governance that has managed to mobilize internal resources and, at the same time, pursue its own socio-economic policy, regardless of memoranda.

If we bethink what was the exchange rate of the MDL against the USD and what was the average size of wages in the economy, we come to the conclusion that these indicators seem to be relatively significant.

In 2004, already in the second presidential term of Vladimir Voronin, the IMF (probably noting that the “party of communists” is just a name, and also the fact that Moldova copes with its own development quite tolerably without external partners), agreed to sign a new program without critical conditions for the country.

With the unlocking of external financing, the government acting that time decided to say "thank you" to domestic investors who used to buy government securities and gradually rolled up the market. Since 2005, by managing the offer, the Ministry of Finance has reduced the rates on government securities, and in 2008, when the economic crisis had already broken out in the world, it even managed to reduce the volume of securities in circulation, having bought out 120 million lei from the market.

It is also interesting how the yield on securities changed during the presidency of Vladimir Voronin. Though, we will return to the yield on government securities over the past 20 years on the chart below.

In 2009, Moldova held elections, thereafter experiencing a change of government and another suspension of the funding program of the IMF and partners....the new government was left without money. The government securities market remained the only source of repaying the budget deficit. By amending the budget law, in 2009 the financing of the deficit was increased to a record 1,600 million lei. But until 2009, no more than 200 million lei a year was planned for the needs of the budget through the sale of government securities in the primary market. However, the government of Vlad Filat very quickly received external funding, so in 2010-2011 the Ministry of Finance brought back the situation to its usual course.

But since 2012, based on previous experience, the budget "got hooked" on the needle of financing at the expense of government securities - their issue amount has tripled. Another record in terms of government securities sale was registered in 2018 - 1570 million lei. This happened on the eve of the parliamentary elections that took place in February 2019; Moldova’s leadership raised then money both for the election campaign and for social (pre-election) snacks meant for the population.

And here is a pause again. And again a crisis, and what a crisis! In 2020, many people had a hard time; the matter concerned states, businesses and people. The expenses of the Moldovan state were aimed at devouring - in conditions when we cannot afford to turn on the printing press (unlike the USA and the Eurozone) the priority expenses were as follows: financing medicine, raising the salaries of medical personnel and increasing social support for the population. We will keep silent about the state’s "support for the business."

Amid the crisis, the issuance of new loans has dropped significantly. Banks, already "sick" with increased liquidity, were forced to channel funds into the only investment instrument present in Moldova - the government securities market.

The total is 5739.7 million lei. So much was transferred to the state budget from the sale of government securities in the primary market. With a budget of 38,505 million lei, 14.9% was financed at the expense of government securities in 2020! In the pandemic, this was, in general, justified. But after such crises, an adjustment is always needed - the money must be returned, even with interest. Fortunately, the weighted average yield of securities was relatively low - 5.19% per annum, while inflation was only 0.39%. This is how it looks:

Weighted average yield on government securities for the last 20 years 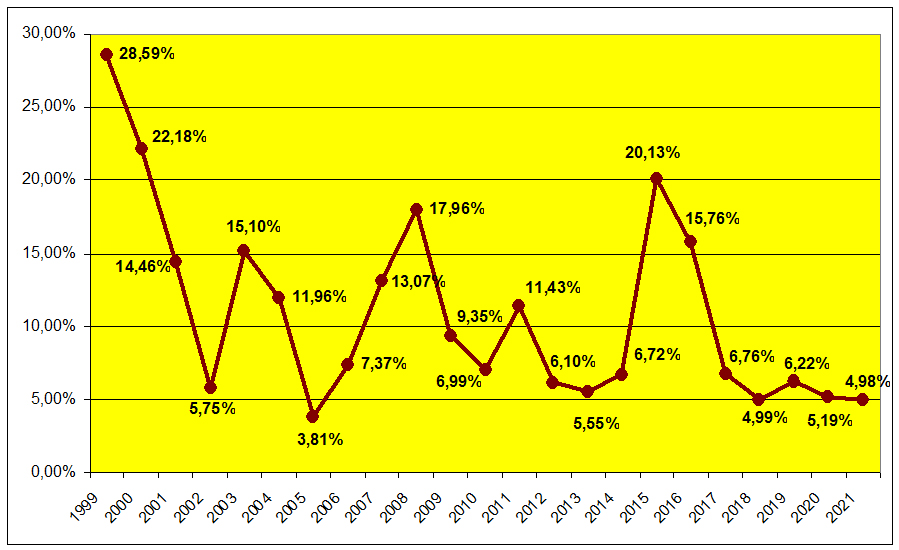 In late 2020, a new President, Maia Sandu, was elected in Moldova, the government of Ion Chicu resigned, and the country faced a major political crisis amid economic collapse. The tug-of-war that politicians are performing does not mean stopping economic processes and monthly payments. And as long as we do not have external financing (the program with the IMF has been suspended), the only source of repaying the budget deficit is again government securities. 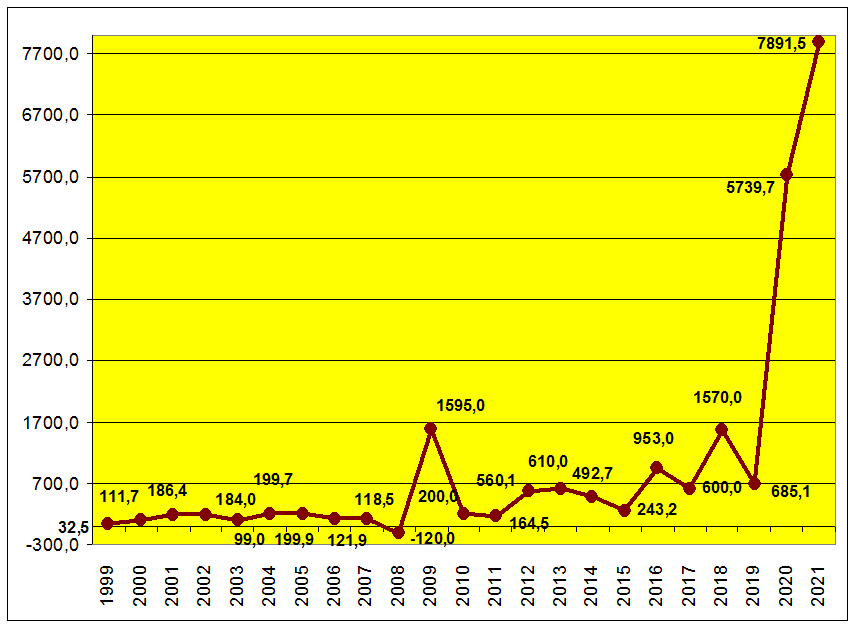 Nevertheless, in order to support the activity in the government securities market and the increased demand for securities, as well as in order to prevent the growth of rates and fulfill the requirements of the law on the budget, the National Bank, at an extraordinary meeting of the Executive Committee on April 5, 2021, first lowers the requirements for mandatory reserve for MDL deposits. The rates have been reduced from 30% to 28% of the calculated base.

Let’s estimate. As of March 31, 2021, there were 79,126.3 million lei in the deposit accounts of all commercial banks. Until now, banks had to reserve 30% of this amount in the National Bank at a small percentage (today it is up to 1.5% per annum). Now, 2% of the total is released. This means that in a month, when the decision takes effect, 1,582.5 million lei will pour into the market - that is, 20% of the required amount that the Ministry of Finance should collect at the end of the year through the sale of government securities in the primary market.

For its part, the Ministry of Finance, another member of the tandem, issues new long-term securities with a maturity of 7 years, trying to raise funds for the long term. But the most important thing is that active preparations have already begun to ensure that state securities can be acquired not only by authorized dealers (commercial banks), and through them - by legal entities, but also by individuals now. To do this, it is planned to simplify the procedure for participating in the auctions, by granting direct access to raising individuals’ capital.

The GS market is a delicate instrument. Under President Voronin, the government understood this and tried not to play too long: textbooks have been written about negative world examples. In the current situation, securities account for almost a fifth of budget revenues and the situation repeats for the second year in a row. There is no respite. And in addition, the Moldovan state undergoes political aggravation...

The situation is reminiscent of the Snake game, popular at the dawn of the computer era, which is known to many from the first Nokia mobile phones. The snake runs across the screen, constantly eats and grows, but the screen area does not increase. // 01.05.2021 - InfoMarket.