When there is no program with the IMF, we issue are government securities ...Data about the Activity of Moldovan Commercial Banks on March 31, 2021Nikolay BORISSOV: “Acquisition of Moldindconbank is the best procurement in the Moldovan market, albeit the most risky one”Oil Ping Pong GamesBanking 2020 - pandemic, profitableWeird 2020: humility, depression, rebellion, accepting a new realityThe Hunger Games of the foreign exchange marketHow to tame liquidity?Veaceslav IONITA: The government killed the business, but flirted with the populationIs it possible to combine the health care of the nation and budget revenues from bad habits?People and Business: Natural and Unnatural SelectionAlexandru BURDEINII: Being ethical becomes vital in business nowadaysValeriu Lazar: The biggest stupidity one can do now is to fire peopleMarin CIOBANU: We are creating opportunities for business development in Moldova, not only in free economic zones2019: three steps forward, two steps back.Plamen MILANOV: 13 persons became millionaires in Moldova within a year due to the lotteryVictor SHUMILO: The sale of hybrid cars exceeded the sales of cars with traditional fuels in 2019."Bewitched by the "Annus Mirabilis". The main events of 2018 Trucks will be able to cross the Moldovan border much quickerAbout the "second coming" and control over the banking system of MoldovaPrivatization of Air Moldova: 2000 vs 2018. To find 10 differences!The Head of USAID Office in Moldova Karen Hilliard: "We promote the idea that winemaking and tourism are integral whole"The Secrets of the Moldovan Foreign Exchange Market - 2017 15 years of leasing business in Moldova: through diversification to expansionMoldovan Leu vs Geopolitics. How does the currency rate interplay with government, entrepreneurs and world’s processes?10 years ago construction of the Trans-Oil terminals in Giurgiulesti port startedDoes it take $200 million out of consumers' pockets to implement European Directives? Who protects the new edition of the law on internal trade?State Securities Market 2014-2016: The Ministry of Finance calculates the losses, investors - income.It will affect each and every one and you won’t find it funny.A careful attempt to pass the dead zoneT-Bills market: The Ministry of Finance is chasing for money, investors - for profitability. Both should be ready for any scenario.The money that can be washed…Phoenix with the Arab capitalMoldova’s Key Macroeconomic IndicatorsPrices at filling stations

Trucks will be able to cross the Moldovan border much quicker 10.12.2018

TIR-EPD (TIR-Electronic-Pre-Declaration) will operate in Moldova again from January 2019. This module allows freight forwarders to enter in advance their cargo data into the electronic information system of all customs services along the entire route of a scheduled shipment: from the point of departure, through transit countries, to the point of destination.

The system does not cancel customs declarations, but due to the fact that customs has already been informed about the nature of the cargo, its employees (and drivers) save time on inspection, and time is the most valuable resource in road freight.

Today, the TIR-EPD system is available in 27 languages and operates in 32 countries, including those neighboring Romania and Ukraine. In fact, Moldova was the first country outside the European Union that introduced TIR-EPD in 2009. However, after the modernization of ASYCUDA World in 2013, the use of TIR-EPD in Moldova was impossible due to technical reasons.

It become possible to eliminate the "white spot" on the map of Europe only this year. The International Association of Motor Vehicles (AITA) has entered into an agreement with the Customs Service of the country and the IT company BASS System to implement and launch the TIR-EPD module with its subsequent transfer to customs.

"The introduction of the TIR-EPD in Moldova is convincing evidence of a constructive dialogue that can exist between the public and private sectors, in this case between the Customs Service and AITA. These two institutes have shown maturity in the awareness of the mutual needs of all entities involved in the process of transportation. That is the reason, our Program supported this partnership and the introduction of a modern tool for freight carriers and customs," said Program Director Douglas Muir.

This summer, the Structural Reform Program in Moldova, funded by the United States Agency for International Development (USAID), it has presented a comprehensive assessment of Moldova's trade corridors (TCA). As noted by Douglas Muir, 90% of international trade in export and import operations in the country is accounted by road freight transport, because it is expensive to use airways, but waterways and railways take a lot of time. However, freight transport is faced with problems of bad roads, lack of specialized infrastructure, seasonal congestion and a huge loss of time due to queues at customs, which, as a rule, were not caused by customs of Moldova.

Acceleration of customs clearance is one of the priorities for the development of export-import cargo transportation, the introduction of TIR-EPD is a significant contribution to this process.

Customs officials emphasize the benefits of TIR-EPD. As the deputy head of department, Viorel Doaga, noted, customs knows in advance that the pre-declaration is filled in by the owner of the TIR carnet and that this carnet is valid. This information exchange helps speed up risk analyzes before the vehicle arrives at the border crossing point, improves safety, reliability and increases the carrying capacity of the border crossing. 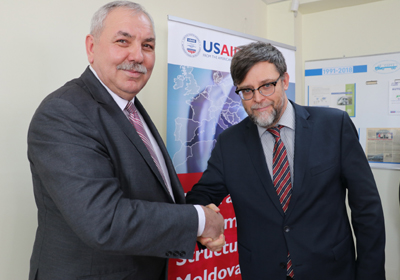 "In addition to the direct advantages for Moldovan transport workers, TIR-EPD provides benefits for carriers from other countries which deliver international cargos to Moldova or in transit through our country, that module allows about 100,000 trips per year," said AITA administrator Dumitru Albulesa.

Electronic pre-declaration became not only a convenient tool but the mandatory procedure in many countries. In the European Union since 2009, in Belarus since 2011, in the Customs Union, Russia, Ukraine, Kazakhstan since 2012, in Turkey since 2017. The system is constantly expanding geographically.

It was noted at the recent presentation of the project that the next stage could be the accession of Moldova to the e-TIR pilot-project, which would eliminate the use of paper carnets, making them completely electronic. The project is already started to be implemented by the International Road Transport Union (IRU) in the Kazakhstan-Azerbaijan-Georgia-Ukraine passage. The representatives of the IRU note that the project can be expanded due to the participation of Moldova in it.

The Customs Service, AITA and IRU are in favor of continuing and expanding close cooperation within this project. The USAID Structural Reforms Program in Moldova, is ready to provide further support, noted Douglas Muir.

"Our study showed that freight traffic in Moldova has increased significantly over the past 15 years, more to the West. At the same time, the freight transportation industry faces problems of bad roads, lack of infrastructure, old equipment, low access to finances, lack of proper regulation and many other problems associated with crossing the border. But, freight transportation is the "blood" of the Moldovan economy, and we want to see that it continues to move forward: that’s why we are here today and continue to work with you," Douglas Muir stressed. //10.12.2018 – InfoMarket.