Trade ways of the country as a basis for development of foreign economic relations 20.07.2018

It seems that Western partners of Moldova understand this more than the government of the country.

The Moldova Structural Reform Program, which is funded by the United States Agency for International Development (USAID) and implemented by Nathan Associates Inc, for almost nine months worked on a comprehensive assessment of the trade corridors (TCA) of Moldova. A 240-page document is being translated from English and will be published. This assessment was fully implemented at the expense of the new four-year USAID program (September 2017 - September 2021), with a total budget of $ 11.2 million.

Data collection, of course, carried out with the support of the Ministry of Economy and Infrastructure and its subordinate organizations, as well as Moldovan customs, but the final work was presented to the Moldovan government, as they say, "on a platter": this is what you have, that's what you need to take, and here are examples and results of the successful implementation of similar projects in some countries of the world.

On behalf of the US government at the event on the submission of the TCA Assessment the US Ambassador James Petit made a speech, on behalf of the Moldovan side, thanks to the Secretary of State of the Ministry of Economy Juliana Dragalin and the Deputy Director of the Customs Service Iurie Ceban. As you can see, very "parity" gratitude for the work done... but the improvement of TCA in the next year or two years can increase the volume of the logistics market and, including, the receipt of the budget by at least 10%.

We will omit the welcoming and thank-you speeches delivered at the event, we will pass to the main conclusions of the TCA Assessment of Moldova: everything is bad, but there is a reason for optimism.

Moldova has problematic borders for exports (imports are implied, but exports are more important). The country has only one river port, that's why the port of Odessa (Ukraine) is often used; The problem of Transnistria is still not solved, which means that the crossing of the border with Ukraine (for further export) is possible only in the south of the country; and in addition - the border with the European Union, that is, with Romania, which is obliged to apply to the import of the strict requirements of the EU.

The geography of Moldovan exports is interesting. In 2000, its share in the EU and CIS countries was 35.1% and 58.5%, respectively, and in 2017 this ratio changed in favor of the European Union - 65.8% and 19.1%, respectively. That is, the Romanian border (and port) is now 2/3 of Moldovan exports. So, there must be special attention to this border. From the point of view and experience of the EU, the crossing of goods on the border between Romania and Moldova is the worst in the European Union.

As the director of the USAID structural reform program Douglas Muir noted, at the Leuseni-Albita customs, freight transport expects customs to pass an average of 1032.9 minutes (17.5 hours). At the same time, at the border crossing between Romania and Ukraine, trucks wait on average 23.5 minutes. (Ukraine has long been working on improving the logistics of freight transport). The worst position in this "anti-rating" after Moldova is the transition of Oradea-Bors (Romania) - Artland (Hungary) - 395 min. (6.5 hours), which is 2.7 times faster than at the point Leuseni-Albitsa. And this point accounts for 23% of all border crossings by trucks from/to Moldova. 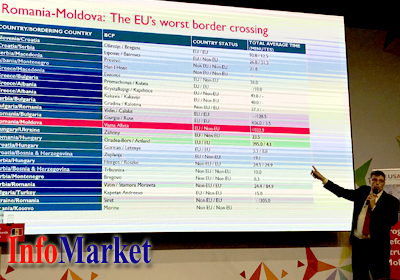 Douglas Muir, at the same time, noted the existing annual growth of export-import operations in Moldova, is severely hampered by inefficient logistics. As an example, the experience of Colombia was shown where the improvement of logistics and, as a consequence, the reduction of congestion at customs led to a reduction in waiting time from 93 hours (per 100 trucks) to 87 hours, for the year the number of border crossings increased from 7,742 to 8276 and led to growth private sector revenues and budget revenues by 7%. In just a year.

The time for passing customs control for freight transport is the most important indicator of the efficiency of logistics, which directly affects the incomes of operators (exporters, carriers) and, as a consequence, on admission to the budget. Instead of waiting for 17 hours at the customs office at one end and the same amount back, the transport company could during this time carry out an additional two or three flights, earn more, and therefore the government would receive more income.

Another important aspect for the logistics sector is the infrastructure. USAID experts note that Moldova has been late for a five-year period (for various reasons, because of the banking crisis) from the road restructuring plan and this directly has a negative impact on cargo transportation (and further - along the chain). But, besides roads, the logistics infrastructure in the country is almost at a very low level - there is something to compare. 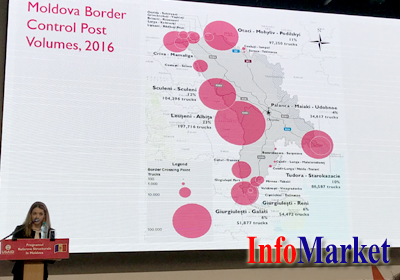 Kristen Hartpence, Logistics Specialist, Nathan Associates Inc , gave a brief description of the Moldovan export (in terms of logistics) capabilities: air-export is expensive; water and railways are very long; road exports are faced with problems of bad roads, lack of specialized infrastructure, seasonal congestion and a huge loss of time due to queues at customs.

The evaluation of Moldova's TCA is not a criticism. Based on the current situation, a lot of work was done to make practical recommendations, taking into account the Moldovan specificity, transmitted into concrete steps.

In particular, Moldova is recommended to create a unified state structure for logistics. According to senior vice president of Nathan Associates Inc, Senior Vice-President Paul E.Kent, such a state organization is called upon to unite all the possible framework for the administration of logistics processes, thereby facilitating the work of sector operators, developing correct fiscal control, online monitoring and improving logistics. International experience shows that usually such an organization is created on the basis of an already existing agency. In Moldova, this role is perfectly suited for the Ministry of Economy and Infrastructure, as it is already in charge of trade, transport and information technology.

On the other hand, the current government has experience when all public services were merged into a single agency.

Of course, such a state doctor, together with the logistics sector operators, should push forward and review legislation to effectively implement policies for sustainable development, and expand bilateral cooperation with neighboring countries, implement existing international practices, and coordinate public-private partnerships.

After all, since for Moldova the main type of export (especially seasonal goods) are freight road transport, the creation, for example, of recreational areas for drivers and waiting for their turn at customs, is a vital necessity. And the best way to build such an infrastructure, according to international experts, is public-private partnership.

Particular attention in the recommendations on improving logistics in Moldova was paid to the need for the use of information technologies so that drivers, exporters and government bodies could not only monitor traffic flows online, but also conduct an interactive dialogue, for example, pre-register in an electronic queue at customs, minimizing waiting time, etc.

Most of the recommendations identified in the TCA assessment for Moldova can be implemented within one or two years and this should immediately have a positive effect on the increase in freight flows in the country.

Paul Kent noted, given the successful geographical location of Moldova, with the rapid passage of customs and the availability of a good infrastructure for freight road haulage, the country could promote its logistics sector internationally and indeed become attractive for transit traffic in the nearest future. // 07.20.2018 - InfoMarket.