The National Bank of Moldova – record! But who cares about those records, and what price you'll have to pay for them? 20.07.2015

The National Bank, rescuing the financial system, won't the economy. Designed to provide life support to the circulatory system of the economy, which is the banking system, NBM is  conservative, and it's kill business, and behind the country's economy. From the side it is evident that the national Bank is feverish: first, it increases lei mass, allowing billions of lei of Banca de Economii, then it sterilizes at the expense of other, higher interest rates and regulations.

Refinancing rate of 15.5% p.a. has again the rate increased by the NBU at the end of June, finished off the loans, but this rate, according to analysts, is not the limit.

The story of the withdrawal from the country of a billion dollars in November 2014 put the whole Moldova in "interesting position". If not whether on its own, allowing the withdrawal of a billion, the National Bank began feverishly to patch the hole.

The national Bank is just breaking all records in the unprecedented. Whatever the decision was made that is the record! 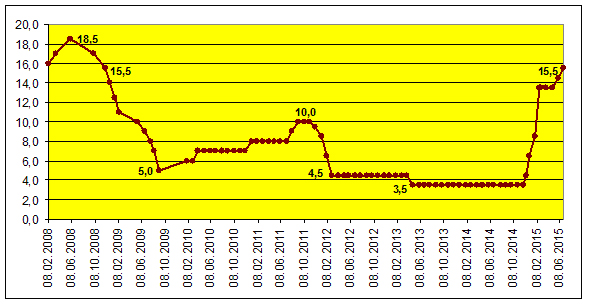 And what happens: NBM raises rates to slow down lending, make money expensive, to reduce their volume, and to reduce pressure on the exchange rate.

In parallel with the increase of the base rate of the NBM increases and norms of obligatory reservation is money that commercial banks must keep on the accounts of the NBM, are expressed in percent of the total amount of funds raised. Until February 2015, the norm of obligatory reservation was 14%; in February- 16%; in March, April, May – 18%; June – 20%; in July- 26%, respectively. That is the norm in less than six months has almost doubled! The money from the banks was simply withdrawn from circulation, and thus to cover the cost of the same borrowed funds banks necessary at the expense of remaining at their disposal.

NBM went on the record: over the last 10 years is the highest norm of the obligatory reservation of in 26%. Even during the crisis in 2008 the maximum of this rate reached 22.5% and was maintained at this level throughout one month. It appears that today the situation is even worse than during the crisis of 2008. Some even tend to call the actions of the NBM panic.

The average profitability of the state securities at the initial offering in 1997 - 2015.

And now, here it is– a favorable environment for the investment, but it is not simple. Another record as a result of the action of the NBM is put by the Ministry of Finance. Instead, to supplement the budget through the sale of the state securities, it had much in this budget to get fulfilling its current obligations. In January 2015 through the sale of the state securities, it supplied to the budget 164,4 million lei, in February (-251,3 million), in March (-135,6 million) and in April (-40,9 million) – taking money out of the budget for the repayment of the previously issued securities. Such "negative" months were registered by the Finance Ministry in the last year, but the maximum monthly amount was -22,7 million lei in February 2014. Negative for the state securities market were in August, September and October of the last year, cumulative to -33,4 million lei; but, not a quarter of a million in February of this year. This trend undermines the confidence of investors in the state securities as liquid investments.

Banks could greatly help the Ministry of Finance, by purchasing government securities, the level of liquidity is almost equal to the national Bank of cash, but the banks free money. As soon as June 25, the NBM increased the basic rate on the first after this decision, the auction of government securities, the Ministry of Finance failed to sell all of the exposed volume of papers and rates, which in June began a little down, went up again.

The banks simply do not have enough available funds. Confidence in the system undermined – not many people are eager to open new deposits, even at higher rates. And lending as one of the main motors of the business is almost paralyzed. Well now, who is ready to take the credit under 17-20% per annum, when six months ago the cost of credit was halved, and the prospects of return on investment is higher.

Dynamics of the average rates on credits in MDL ( % , annual) 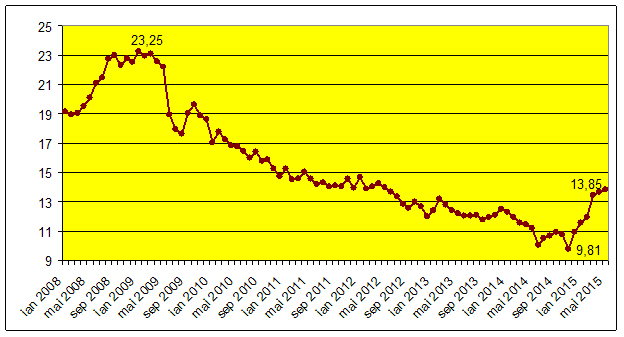 It is likely that NBM sterilizes lei mass and pressure on the exchange rate is not much reduced. After the jump, and achieve a peak in its history on February 18, 2015 in 20,9933 lei per us $1, the rate remained at a still quite high level. 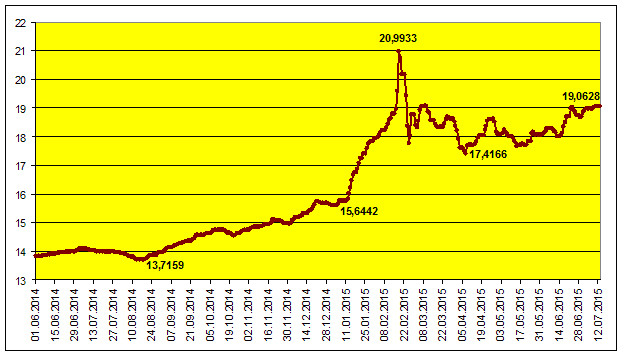 Currency interventions are not of big help to NBM. Foreign exchange reserves over the last nine months – with the notorious November 2014 decreased by almost half! 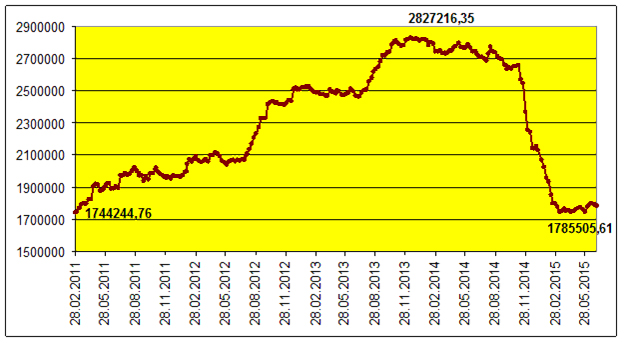 One of the reasons for devaluation of leu is the decline of income from the migrant workers from abroad. And, unfortunately, this fact exists. However, these processes were completely predictable and rather accurately computed.

The dynamics of transfers of individuals from abroad by month (in million USD). 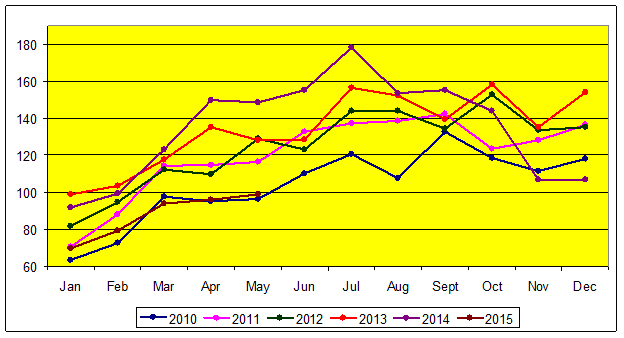 In fact, the dynamics of foreign exchange earnings of 2015 repeats dynamics of 2010. There is, in general, we rolled back in the post-crisis year.

But after all, the main NBM aims to keep inflation within a given corridor. And this corridor was set at 5% p.a. plus or minus 1.5 percentage points; that is, in the corridor of 3.5-6.5% p.a. The sharp devaluation of the national currency automatically led to a rise in the consumer prices, and now in June 2015, the annual inflation of 8.3%. At the moment when the fourth consecutive month the level exceeds the upper limit. And ahead, apparently, the increase in the prices of petroleum products and electricity, which will give another impetus to the inflation rise. 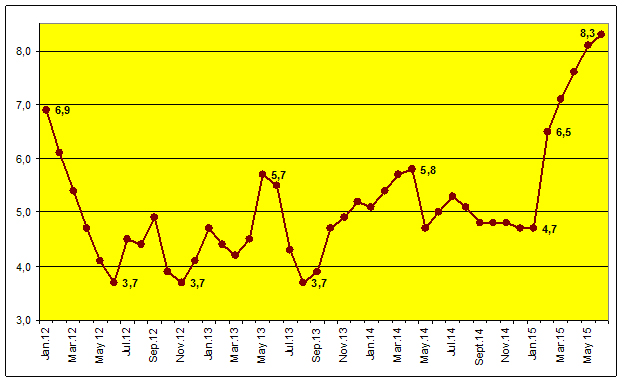 But what's important! NBM is taking measures to sterilize the lei mass, whereas excess of lei in the country, but there is a scarcity of currency. Income from individuals returned to the 2010 level, and Moldova for more than six months has no external funding or foreign exchange allocations.

The role of the reference rate today is not so categorical. Earlier on the base rate of the NBM itself lent to commercial banks, and the banks, adding their margins, have provided these resources to the economic agents. But NBM longer provided lending to the banks, and the reference rate is now greater than the benchmark for the market, rather than a guide to the action. This explains the fact that banks are not so quick in a hurry to raise interest rates on the loans, knowing that the market, their customers, a sharp increase will not sustain and everything may just fall off.

At the same time reduced the number of people willing to put money on deposits in Moldovan banks. Despite the growth rates in May 2015 in comparison with May 2014, the volume of term deposits in MDL decreased by 8.6%; in foreign currency – by 8.1%. But the deposits are key measure of confidence or, conversely, has not confidence to the banking system of the country.

Serious problems in the Moldovan economy have already begun. Due to the banking and financial instability storms, few risks to start new projects, on the contrary, if possible previously started swerving. As a consequence, reduced costs, lay off staff, reduced income and... reduced tax payments.

In such cases the state by scheduling expenditures, will do everything to achieve planned revenues. Methods used in such cases are not very good for business, which is already experiencing problems in all segments of the market, under pressure from regulatory authorities, will seek by all means to survive (as an example) - until the closure of companies and the return to the patent relationship with the state.

In recent years, the budget always exceeded the planned level by 1-3%. This year the shortfall, and forecasts more than pessimistic.

Budget organizations have already felt the shortage of money in the form of delays of payments on the state purchases including the delays in the wage payments.

In the current situation, one thing is clear: the NBM methods today, do not give the desired effect on the contrary, have become a stick in the wheels of the Moldovan economy. Measures are more extensive and deep, during encouraging business and, above all, the creation of stability in the political and financial spheres. Without this, the country will collapse, and very soon.// 15.07.2015 – InfoMarket.