The Auto Market as Indicator of Economic Development. 20.10.2014

New car sales in Moldova in September of this year registered the lowest rate in the last 18 months. Last month 309 of new cars were sold. Worse outcome was registered in February 2013 - 252 cars, respectively.

In the pre-crisis year of 2008 was registered the peak in sales of the new cars - 11571 cars per year, and in October the best indicator - 1175 cars was noted. If in November-December 2008 almost a thousand new cars were sold at the market, since January 2009 there was a decrease - sales fell more than twice. Moreover, as monthly sales and annual results in 2009 5437 showed sales of the new cars - 2.12 times less than in the previous year. 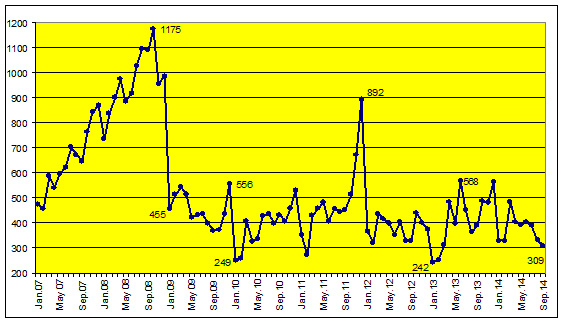 In general, the new cars’ sales are one of the most striking indicators of the economic growth or decline. When people have money they are seeking to exchange the old car for a new one, when the economic crisis happens- the new cars stay idle in the auto salons. In 2009, the global financial crisis as the change of power has occurred in Moldova.

Based on this indicator the growth dynamics of economic well-being of the people of Moldova is clearly visible. We can cite data from 2002. 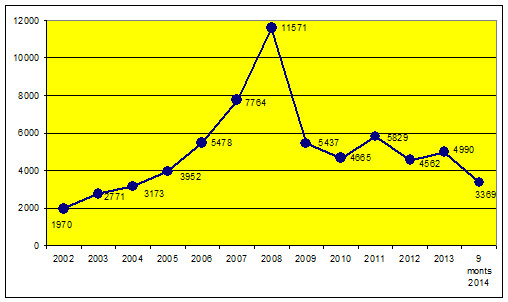 Since 2002, the demand for the new cars from year to year is increasing, and from 2005 this rate was growing in half a year. The peak was reached in 2008. After the crisis, a dramatic collapse has followed.

Since 2009, the market fluctuated, but it was possible to remain sales at the level of 2005-2006, and this year, as it seems, the situation will be the same. Despite the fact that for 9 months, were less than 3.5 thousand of the new cars were sold, traditionally within the last months of the year relatively high sales were registered, so the market expects the results comparable with 2012-2013.

The secondary market registers stagnation – it is said that the last time the cars are not sold. But actual situation is not true to the fact: for 9 months of this year were carried out almost 22 thousand transactions in this field. This rate is higher than in the previous years at the end of the three quarters.

Dynamics of registration of cars (new and with mileage) in January-September 2007-2014. 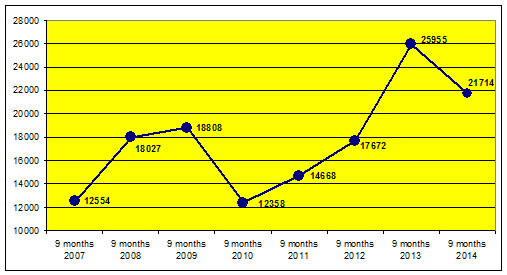 In other words, transactions for the purchase and sale of cars happen constantly: they made 16% less than the last year, but their number is much larger than in 2007-2012. In general pessimistic market disposition is connected by market saturation, especially pre-owned, and the depreciation of the Moldovan currency: in conditions when the car prices are calculated in euros. For example, for 9 months of the last year the average rate of leu to euro made 16,3916; and for 9 months of this year- 18,586; so leu rate in this period fell by 13,38%. So 10 thousand euros rate makes 164 thousand lei, or almost 186 thousand lei.

We cannot ignore the Russian embargo. As it was mentioned before, traditionally, in the last months the growth of sales of the new cars is registered, but the same applies to the cars with mileage. It is attributed to the fact that in the autumn months and before the New Year it is planned to summarize the results of the year and the share of these funds goes to the auto market. It is rather difficult to predict what will happen this year.

The car market in Moldova is highly dependent on the political decisions. In 2005 there was a restriction on the cars’ age, which can be imported into the country: the threshold was reduced from 10 up to 7 years. On the one hand it accelerated the sales of the new cars, with the other beneficial effect on the environment; after all, the older the car is; the greater harm it makes. This would also reduce the number of accidents that occurred due to the malfunction of the old cars. As a result since 2005 the sales of the new cars have increased.

In summer of 2010 the Parliament attempted to increase the age limit of the car allowed for import in Moldova from 7 to 10 years; stipulating this by the fact that in 2005, a reduction in the threshold to 7 years was in the interests of the certain cars importers, and not in the interests of the ordinary citizens. The return of the threshold to 10 years will reduce the cost of cars and will give ordinary citizens the opportunity to import cars for the personal use.

At the same time, the second reading of the bill then failed with arguments that import of cars older than 7 years will have a negative impact on the road safety, increase the accident rate on the road, will lead to the fact that Moldova will be filled with the old cars, which are actively withdrawn from the neighboring countries and the countries of the region.

At the same time, two years later, the deputies returned to this bill, which was voted upon and came into effect from 1 January 2013: we import cars aged up to 10 years old. Moreover, it is allowed to ride vehicles registered in other countries throughout the year - earlier the period was limited to 180 days. Owners of these vehicles should only pay road tax- vignette.

These factors had a negative impact on the domestic market, which was again filled with inexpensive 10-aged cars and which does not have customs clearance in Moldova.

The share of the new cars in the total index of transactions on sale-purchase of cars in 2002-2014. 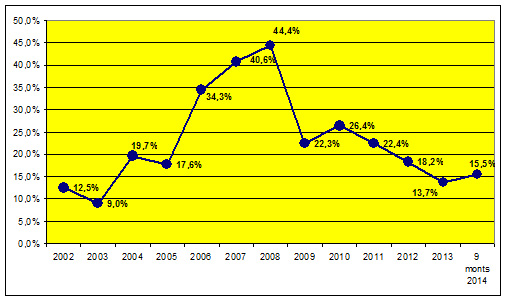 On the results of 2008, three of seven sold cars were new. But after the crisis the situation has changed.

The dynamics of the new cars’ sales on the background of the total cars sales in 2002-2014. 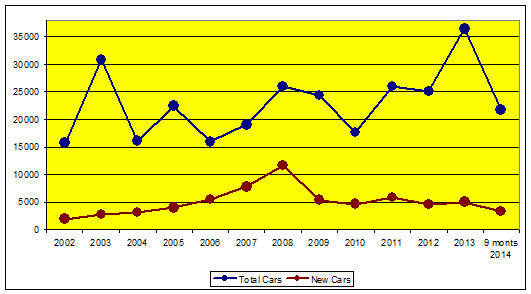 In 2005-2012, when in Moldova existed ban on the import of cars older than 7 years, vehicles up to 10 years were allowed to be exported to Transnistria. Many, having registered it for the citizen of Transnistria, used it at the territory of Moldova by the letter of the authority.

Automotive segment carries two main components: the car market with the primary sale in Moldova and the market for those cars that were for the first time sold in another country. So the first segment has a legitimate sale, jobs, certified service especially when manufacturers give warranty from three to seven years. They have cars with an honest history, with a higher level of security and environmental control.

[19.10.2014 12:28:28] Andrei Gorshenev: The second segment is mainly cash, for the numerous auto-elaborations, socially unprotected labor, up to the illegal business activities. These cars have not always an honest history - sellers often hide the fact of an accident or even the fact that the car surfaced after the flood. It is also a car with a higher risk of the road accident due to the technical failure and more harmful environmental performance.

It is clear that every driver wants to participate in the first segment of the car market. But the economic and financial situation in Moldova makes the majority of drivers the consumers of the second category of vehicles and auto services. Since the sales of the new cars are an indicator for the whole economy, it seems, based on the results of the last 9 months of the year, the forecast growth of the Moldovan economy in the nearest future is disappointing.