The Finance Ministry is increasing issuance of the state securities. The law on the budget for this year originally planned to collect from the sale of SS at the primary market and distribute them to financing of the state budget 430 million lei. However, according to the results, only the first half of this amount was exceeded by 536,7 million lei. However, the law allows to increase volume of placement to cover the temporary cash gap in line with the budget at the end of the year. The Ministry of Finance published a proposal to change the figure budgeted - that is it adjusted depending on the market situation and budget needs.

This year the rectification occurred in July, when amendments to the budget that increase the amount of initial placement in 2014 almost doubled from 430 million lei to 830 million lei.

It reminds of 2009, when the economic crisis and the change of power in the country, the problems of replenishment sharply increased budget deficit. Thus, initially, it was planned to save "zero position" - the Ministry of Finance planned neither to purchase securities nor to increase their volume in order to accumulate funds for the budget support. However, the reality demanded other actions.

Dynamics of volumes of financing of the state budget due to the issuance of securities in the primary market (1999 - 2014). 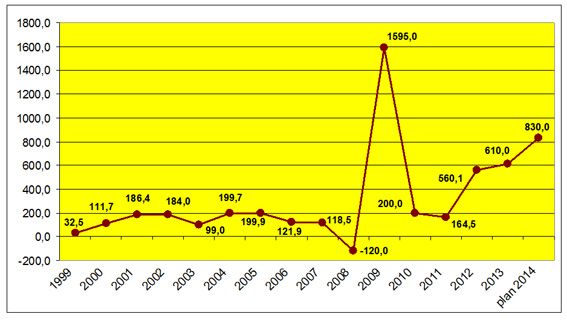 Until 2009, the Ministry of Finance controlled the increase in volume of state securities in circulation within 200 million lei per year. In 2008 it was possible to finish with a negative result by reducing the amount of internal state debt in SS position.

In 2009, the issues of state securities in general saved the situation. April, and then November elections, has resulted in both direct and indirect costs. Thus it led to economic stagnation and as a consequence it resulted in sharp decline in tax collections, and almost frozen crediting.

Against this background, when the state has to pay pensions and salaries in the public sector, especially in the election period, when it must be done on time, the budget decided to borrow money from banks because they are a major investor at SS market. At the zero inflation in 2009 the average return rate on SS amounted to 9.35% p.a. 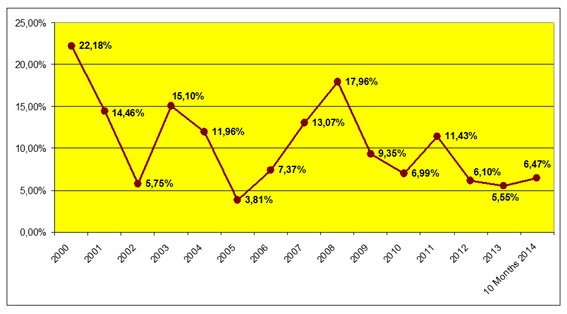 
So, in 2009, in view of the already mentioned reasons, a significant contribution to the budget was made due to the sale of SS at the primary market. After elections in 2009 the International Monetary Fund – for the first time in its history provided Moldova with a loan, which, in fact, was donated-$130 million: these funds allowed the new government to fill up the empty budget and to pay wages and pensions.

Since 2010 the situation at the state security market should have stabilized. The replenishment of the budget deficit by selling SS at the primary market made again 200 million lei per year. However it was possible to do only in 2010 and 2011.

In 2012, sales of the state securities at the auctions increased by 3.5 times in comparison with the previous year; in 2013 – by 10%; this year it is planned to increase the issue of securities by 36% -830 million leis collected at the auctions must replenish the state budget.

Dynamics of volumes of financing of the state budget due to the issuance of securities at the primary market (1999 - 2014).

In 2009, "Banca de Economii" took the loan in the National Bank, to repay the debts of the bankrupt "Investprivatbank" to individuals. Now this debt was borne by the state budget in accordance with the decision taken on 30 September 2011 by the Parliament. The repayment of these state bonds is made quarterly until December 2015.

The dynamics of securities in circulation, (including securities placed during primary trading). 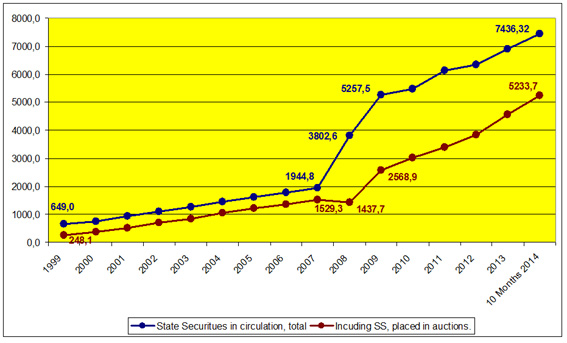 At the end of 2008 NBM portfolio had 2,36 billion lei of the state securities and by November 2014, the volume decreased up to 2.2 billion lei. Thus for nearly six years, the Ministry of Finance purchased securities from the National Bank for only 160 million lei. In fact, the redemption of these securities should be done every year, but in fact the national Bank meets the problems of debtor depending on the current financial and economic situation in the country.

This year, as was noted above, from the initial 430 million lei, budgeted as revenues from the SS sales, the Ministry of Finance has increased the amount up to 830 million lei. The changes stipulate that this amount will be received by the budget in case if Moldova until the end of the year for any reason will not receive the scheduled tranche from one of international financial institutions. The reason is clear- on November 30 the parliamentary elections will be held in the country.

Total significant growth in the volume of SS in the last seven years, analysts attribute to international financial and economic crisis. In such times, many countries of the world, not being able to borrow on international markets, try to find funds at the domestic market. The only question is, till what time the state can serve the current debts and make new ones; as it is directly linked to economic growth in the country.