Data about the Activity of Moldovan Commercial Banks on December 31, 2020Weird 2020: humility, depression, rebellion, accepting a new realityThe Hunger Games of the foreign exchange marketHow to tame liquidity?Veaceslav IONITA: The government killed the business, but flirted with the populationIs it possible to combine the health care of the nation and budget revenues from bad habits?People and Business: Natural and Unnatural SelectionAlexandru BURDEINII: Being ethical becomes vital in business nowadaysValeriu Lazar: The biggest stupidity one can do now is to fire peopleMarin CIOBANU: We are creating opportunities for business development in Moldova, not only in free economic zones2019: three steps forward, two steps back.Plamen MILANOV: 13 persons became millionaires in Moldova within a year due to the lotteryVictor SHUMILO: The sale of hybrid cars exceeded the sales of cars with traditional fuels in 2019."Bewitched by the "Annus Mirabilis". The main events of 2018 Trucks will be able to cross the Moldovan border much quickerAbout the "second coming" and control over the banking system of MoldovaPrivatization of Air Moldova: 2000 vs 2018. To find 10 differences!The Head of USAID Office in Moldova Karen Hilliard: "We promote the idea that winemaking and tourism are integral whole"The Secrets of the Moldovan Foreign Exchange Market - 2017 15 years of leasing business in Moldova: through diversification to expansionMoldovan Leu vs Geopolitics. How does the currency rate interplay with government, entrepreneurs and world’s processes?10 years ago construction of the Trans-Oil terminals in Giurgiulesti port startedDoes it take $200 million out of consumers' pockets to implement European Directives? Who protects the new edition of the law on internal trade?State Securities Market 2014-2016: The Ministry of Finance calculates the losses, investors - income.It will affect each and every one and you won’t find it funny.A careful attempt to pass the dead zoneT-Bills market: The Ministry of Finance is chasing for money, investors - for profitability. Both should be ready for any scenario.The money that can be washed…Phoenix with the Arab capitalMoldova’s Key Macroeconomic IndicatorsPrices at filling stations

At the end of 1995, I accidentally drew attention to the fact that a one-world system of quick money transfers became to be active, developing relations with one of the largest network of banks in our country. For the first time in the Moldovan press, I published an article about how much money into the country from Moldovan citizens working abroad come to the country. According to the results of 1995 -total 15 million dollars; but the emphasis was not so much on receipt in the country of currency from abroad, but on the appearance at our market of a new activity.

In other words, fast money transfers appeared at the market long before than the word – guest-worker has appeared.

Who would have thought that the first analysis in the media of cash receipts through the system of fast transfers in 1995 will mark the beginning of a new era of economic development of Moldova?

Today I want to express my sincere gratitude to people who are not on their own, not so much in search of a better life, for already for 20 years, support not only friends and relatives remaining in Moldova, but the entire Moldovan economy.

Since 1996 the share of private income from abroad in Moldova, according to the World Bank, exceeded 5% of GDP of the country. In 2007 this indicator reached its maximum - 34,5% of GDP! That is, every third earned dollar in the Moldovan economy had come from abroad.

The share of money remittances from abroad in GDP. 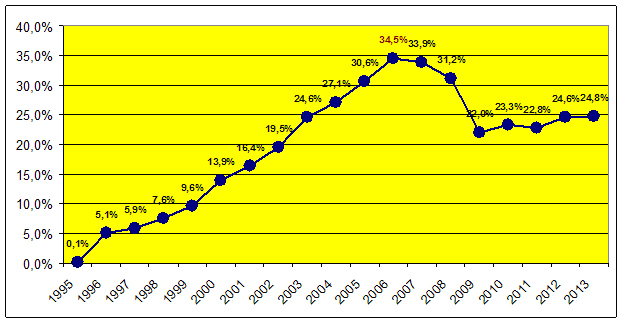 According to the World Bank in 2006, Moldova became the first among the European countries by the volume of remittances from abroad, and in 2008 - the second in the world; and by the end of 2013 has moved to 5th place in the world.

But in 2007-2008 transfers from abroad by individuals exceeded the amount of foreign direct investment in the Moldovan economy in the history of observations - 2,9 billion dollars.

So each state is interested in the positive trade balance, i.e. the volume of exports exceeds imports.

The most important export item for our country became our people. Moldova did not only export goods, Moldova exported labor force. But what is the final result? 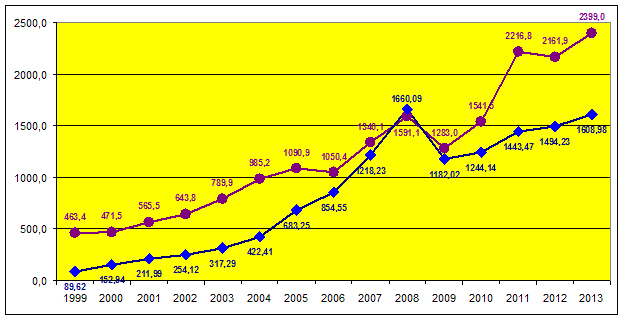 In 2008 the volume of remittances even exceeded 4% of the receipts from the exports of goods and services!

Moldova is import-dependent country. Our balance of payments is always negative. This means that we significantly more import than we export.

As we see, the import sometimes three times higher than export that makes our economy very weak and dependent. But if we consider the export of manpower, the ratio of export-import looks much more optimistic. 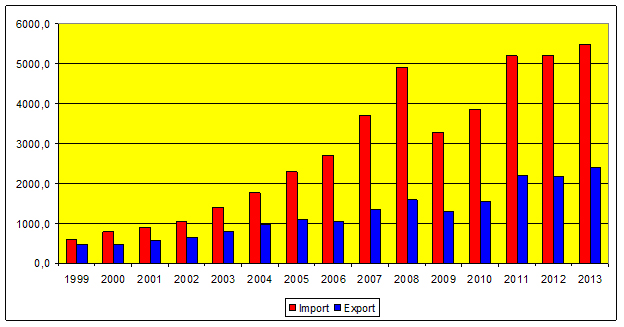 In 1999, exports and remittances were almost equal - only 6% of export fell behind imports except for informal remittances. 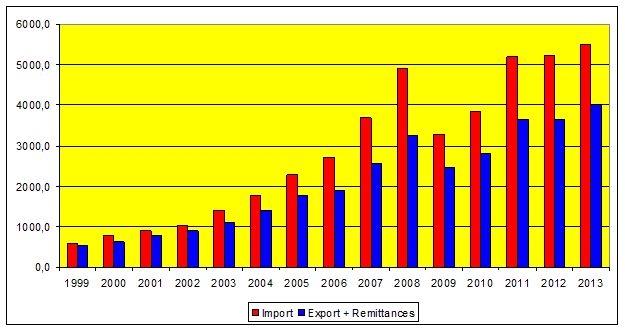 The comparison of dynamics of GDP, state budget and cash receipts. 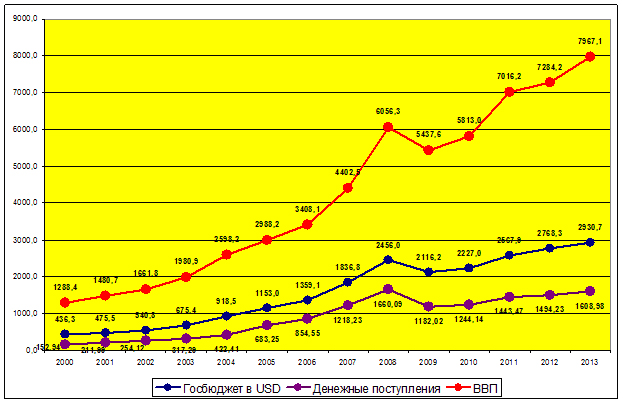 It is difficult to overestimate the contribution of remittances in the Moldovan economy over the last 20 years. We have only the official data published by the national Bank.

The World Bank has its own methodology, and it tries to take into account illegal payments - that is, money that is sent privately, through the drivers and acquaintances.

The true amount of such "money transfer" no one knows, no one knows how many of our citizens are working abroad.

In the most effective year - 2008 - according to various estimates 700-800 thousand of our citizens were employed abroad. 1.66 billion dollars were transferred to Moldova. That is, each only officially transferred to the country on average 2370 dollars per year - almost 200 dollars a month. Minding, that the average salary in Moldova in 2008, according to official statistics, amounted to $ 240.

Interesting structure of remittances by the types of currencies.

Dynamics and structure of remittances by the type of currencies-%. 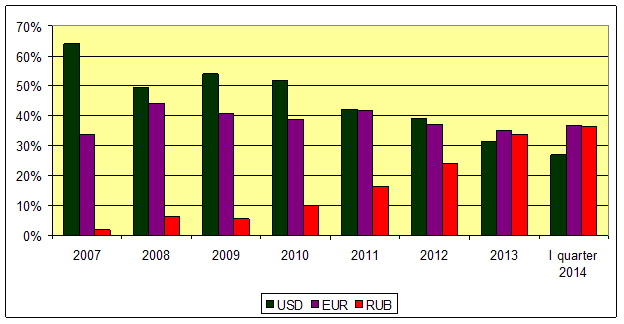 In the mid-2000 major income in Moldova was carried out in US dollars. This is inter alia due to the fact that money transfer system at that time worked mainly with dollar and euro, and from CIS countries money to Moldova was sent in dollars. Later, there appeared a possibility to transfer money from Russia in rubles without the additional losses in conversion.

There is a decrease in revenues in euro in 2009-2010 - just in the post-crisis years in Europe, and on this background there has been an increase in the ruble component: particularly in 2011 - 2014. On the one hand, the European crisis forced labor migrants to move to Russia, which, by the way, was necessary within the last three years during the Olympic construction in Sochi.

The current political situation is not very favorable for migrants in Russia, but has opened more opportunities to gain a foothold in legal work in Europe. While in Russia many Moldovan citizens have received Russian citizenship.

Perhaps by the end of 2014 revenues of euro within the structure of currencies will be fixed in the first position of these three types of currencies.

Migrant workers, especially in 90 years, have encountered the problem as safe and cheap way to send money to relatives in Moldova. There were many stories when workers were simply robbed in the trains. Then only expensive money transfer systems existed, and the cost of transfers reached 20% of the amount.

Today all are more civilized. In the CIS countries with a dozen fast money transfer systems under 1-2% of the amount; and well-known international monsters restrain their appetites. This cannot be said about Europe yet.

The president ABM Leonid Talmaci: "Currently, the existing international system of money transfers between Moldova and Italy charge Commission on average 7-13% of the transfer amount, so often our compatriots send money via drivers on the regular bus routes, and the price of such very unsafe transfer – is up to 4%. The signed agreement will allow establishing direct relations between banks of Moldova and Italy, and, on the one hand, significantly reduce the cost of transfer services, and from another - to improve the security of money transfers between both countries".

When the system will be running, a similar agreement will be signed with Portugal, France, and Spain - with those countries, where there is the greatest activity of Moldovan citizens.

Earlier system VISA announced through one commercial Bank, that started to provide money transfer services through its cards - but so far only on the territory of CIS. The advertised rate is 1.5% plus 2 euros. The same cost of transfers is expected between Italy and Moldova by MasterCard. But, if in the CIS there is an alternative - the majority of systems operate with a 1.5-2%; in Europe it will have significant reduction.

This is a real assistance to our citizens working abroad. However, the government tries to attract money in the development of the real sector of the economy. So there was a program PARE 1+1 when per every lei, the state invests another one. Thus 313 such projects since the start of the program in 2001 were approved, worth more than 200 million lei. Thus, having invested 200 thousand lei of your money in business, you can get from the state up to 200 thousand lei, which should not be returned. According to statistics, for 1 leu invested by the government under this program, private investment in the economy is 4.4 lei.

Such stimulation of the investment of the migrant workers in the Moldovan economy is very strange and even outrageous the attempts of some officials to the tax receipts. From year to year during the discussion of the budget-tax policy sound similar proposals in favor of immediate budgetary benefits. But if these proposals will take place and the money from migrant workers will be taxed - that would be a major blow to civilized development and the credibility of the government. The money is cleared from taxes in the countries of origin and additional taxation would be a crime against our citizens.

It seems that common sense will prevail, and officials will not cut the bough of the tree which feeds them.

When Moldova will become a full member of European Union in 10 or 20 years and will pass from the status of a developing economy to a developed country it should put a monument to the labor migrant that helped Moldova to overcome the period of economic collapse.