For the first half of this year, the insurance companies have collected premiums amounting to almost 576 million lei: it is only 0.7% more than for the first 6 months of the last year. Can we talk about the development of the market? I think it is not possible...

In the recent years, the regulator and the insurance segment is the National Commission for financial markets is taking steps to reduce the number of players at the market. May be the company efficiently executed its task and the controller observed the duties of insurers and the rights of the policyholders. The easiest way to improve the financial stability of companies is to raise regulatory capital requirements. The one, who could not have raised the equity capital of up to 15 million lei, was forced to surrender its insurance license.

For 23 years - since Moldova gained independence a number of insurance companies on the market amounted to three dozen. By the increasing requirements for insurers and in general, natural selection, to date 16 insurance companies remained at the market. I think that by the next year two or three companies will disappear from this market as well. For example, in the first half of this year the license of Euroasig Grup has been revoked. 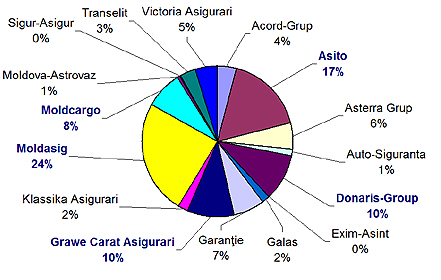 Distribution of the attracted insurance premiums 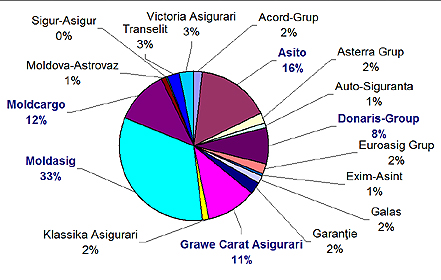 Last year MoldAsig in terms of premiums occupied one third of the market - 33% - so its share dropped up to 24%.

From other companies the rise was registered in Garantie – which share for this year increased from 2% to 7%. Other companies have shown regular results in this point.

So, what is the reason for the decline in the share of MoldAsig? Many believe that this is due to the new shareholders. It can be reminded that from 2008 to July 2012, the company was a part of the group "Rosgosstrah" which owned 80% of shares. Then Rosgosstrakh sold its share of the five companies, resulting in the number of shareholders increased to eight, including three companies with the state capital of Moldovan Railways, Posta Moldovei and Banca de Economii.

The fact of change of the shareholders was the decline in Moldasig share at the insurance market of the country.

Share of the company MoldCargo has not fallen as much, as the company was excluded from the Green Card Bureau. The same fate befell to Grawe Carat Asigurari. It even became the subject of proceedings in the Competition Council, by its decision this year five insurance companies - the current members of the Green Card Bureau - Asito, Moldasig, Donaris Group, Classica and Victoria Asigurari Asigurări - were fined for 1 million 400 thousand lei for the disloyal competition. However, fines helped neither Garwe nor MoldCargo to restore the membership in the Bureau Green Card.

By the way, this office is a closed organization - and no one can force it to accept new members or to exclude the old ones. Issue of a green card was even discussed at the parliamentary level, where the corresponding bill is at consideration at the moment.

As it was noted above, 37.5 million of premiums were allocated in Garantie, which allowed increasing its market share from 2% to 7%. CEO of the company Mihai Raducan explained this success by the several factors: the development of the new products, expansion of work in the segment of medical insurance of citizens traveling abroad, as well as activation of the classical Garantie insurance packages regarding risks related to the oil production. It can be reminded that the company enters in Ascom Grup holding.

The premiums are only a part of the insurance company work. There is an anecdote: on one floor of the insurance organization - door-in-door - operates three divisions - one reports to the management- how much premiums were collected, the other- how many payments were made, and the third reports how much money they saved not paying the required amount to the clients.

In the 1st half of 2014, all insurance companies have paid out in form of refunds almost 279 million lei, it made 48,44% of the premiums collected and the last year for 6 months the payout ratio made up 34.4%.

Compensation in the 1st half of 2014 in relation to the collected premiums.

Ratio of payments to the premiums collected (January-June 2014)

Here we must remember that if this ratio is greater than 100, it means that the company pays compensation more than the premiums collected, i.e. it leads to the unprofitable business, and therefore, it is necessary to see, if the company's reserves are available to meet obligations required.

If the ratio is too low, therefore, the reimbursement can be difficult.

The leader in this list is Exim-Asint- the company that is gradually completing its work. At the end of last year, it voluntarily gave up its license, refusing to provide the insurance services. Therefore, bringing in the old treaty only 40 thousand lei premiums in the 1st half, it has paid more than half million of claims, correctly performing its obligations under the old contracts.

The market leaders on the premiums have absolutely different indicators. For the first time in the history of the active market participant rate of recovery exceeded 100% accounted for MNoldAsig which collected 141.6 million of premiums and paid 154.2 million in claims.

The main cause of the increased insurance payments, and as a consequence, large losses in MoldAsig are due to the fact that the last year the company began to actively insure financial risks for financial risks of the principal payments.

CEO Vitalie Bodea told us that MoldAsig does not fund financial risks any more. This attempt to broaden the scope of work of the company brought the negative result. In general, the company's work in the previous years has allowed to accumulate sufficient reserves of 175,2 million, and since the half year results, in general it will be seen which results will be achieved by the company this year.

It is as follows….

Leaders on income and losses in I half of 2014.


The situation a year before…

Leaders on income and losses in I half of 2013.

Even in the first half of last year MoldAsig was a leader at the market with a profit of 8.4 million lei, while a year before its’ losses amounted to 37.2 million lei. Last year Asito for 6 months work earned 0.44 million lei and in the first half of this year registered losses of 14.5 million lei. Asito explains the loss of the leadership change and by the total inspection of all units - those defects that were previously hidden and now revealed at the present time. At the end of the year, the company has all the chances to get a plus.

The interesting point is that in situation where the results for the first half of this year on a number of market-shaping companies differ in the dynamics and in the worst side indicators from last year's first six months which is stated by the regulator - the National Commission for financial market. Compared with other regulators NCFM has very little comments on the events in the controlled market and deprive society of the professional appraisal of the State Supervisory authority. These market indicators are somehow slumped. This must be the reason, which aims not to be only identified, but to expose the regulator to give an objective assessment and forecast, including their future actions, confirming that the National Commission for financial markets controls the situation. It is assumed that NCFM still controls the situation, but in modern society public institutions need not only to do their job, but at the same time to inform the public on the results achieved.

In general, in the first half of the year, no disasters that had a significant impact on the insurance market of the country, significantly impacting its performance in the world practice were registered at the insurance market of Moldova. Insurance companies are a priori profitable business, which suffers losses only in crisis periods, offsetting their customers’ losses of the previously accumulated reserve funds.

In other words, the results of the first half with one hand say that the insurance market in Moldova is not stagnant - the growth of premiums made 0.7%. But if you calculate the volume of the market on the exchange rate, last year the volume of premiums collected for 6 months amounted to almost € 35 million; and taking into account the devaluation of leu – to 30 million euros. Since almost all types of insurance (perhaps except for mandatory insurance of auto civil liability) are somehow related to euro the drop at the market actually made up 14.3%.

We can say that the companies now face stiff competition. In order to increase the market it is necessary to have new products, new campaigns, improving economic literacy of clients, and the clients’ base expansion.

On the other hand, the half-year results show that in some companies, there are some changes, which should not be painted in black or white color. The results will be seen in the end of the year, which will be published in March 2015. But it is necessary to get the results from NCFM about the existing problems and the measures taken to resolve them. We hope that after our proposals, the National Commission will give its’ comments on the interim results for the 9 months, which will appear by the end of the year and not only the bare figures cited before.