In May of this year, the exchange rate of Moldovan leu vs. the US dollar has registered a maximum level for the last 10 years.

In general, the cheapest level of lei made up 14,784 per dollar on April 14, 2003. But since then, leu strengthened and remained within the framework of stability.

Autumn of the last year has become a new starting point - almost daily leu rate has became cheaper and cheaper. The National Bank insisted and continues to take this situation under control saying that they want to pay attention to other circumstances, which, perhaps, are true due to devaluation of the Moldovan LEU.

The level of basic rates influences the market of the state treasury bonds, as well as the rates on deposits and loans in the banking system.

On May 2012, for eight months, the National Bank does not affect the internal currency market – it does not sell the currency, it doesn’t buy it. Eight months without foreign currency interventions of the National Bank the market itself determines the rate of MDL - on the basis of supply and demand. As a result the exchange rate shows stability, barely approaching the level of 12 lei per dollar.

In May 2012, the National Bank, after 8-month break suddenly decides that the market needs intervention and begins actively buys up foreign currency, explaining it later in its comments, that the purchase of foreign currency from individuals will replenish foreign exchange reserves.

From May to December, its’ purchases amounted to 322 million.

Purchase of currency by the National Bank from the market from January to December 2012 (million USD).

The growth of cash in circulation in 2012 (million lei). 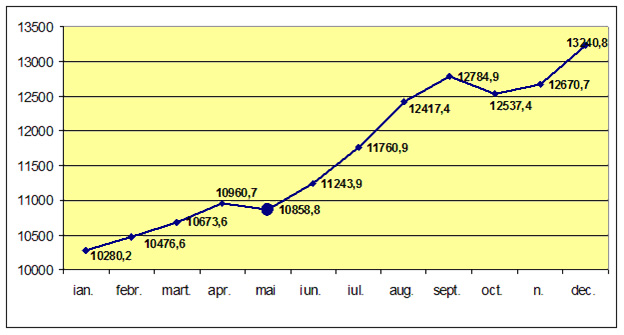 Purchase of currency by the National Bank from the market from January to December 2013 (million USD).

It should be noted the National Bank made a major intervention in July, August and September; and the rate registered in August, September and October, reached on October 11 the maximum index of 13.1581 lei per dollar.

Moreover, the National Bank insistently invites all market participants to be engaged in currency speculations.

In October the National Bank stated that: "A moderate depreciation of the national currency takes place this year in accordance with the monetary policy of NBM and directly retaining of inflation contributes to reduction of the deflation pressure by stimulating the domestic demand."

Thus, it openly admits that all its actions, including purchase of currency and depreciation of leu are not the requirements of the market, but vice versa – it is a deliberate policy of the National Bank.

Ultimately, the mechanism is running, and the National Bank perched other market participants.

In November 2013, the National Bank stopped purchasing the foreign currency. In November and December, it did not participate at the currency market, and lei continued its’ devaluation.

The situation led to the fact that in February 2014 the National Bank has permitted to further fall of leu rate to urgently fill the market with the currency and sold 73 million.

At the same time the President of the Bank Dorin Dragutanu in various media threatened to commercial banks, saying that openly will call to answer those who are engaged in speculations.

The schedule of currency interventions of the National Bank
from 2012 in April 2014 (million USD).

Dynamics of the exchange rate during this period (MDL vs. USD).

Despite the fact that the National Bank has already departed from participation in this process, the demand for currency is growing and the market is experiencing happen shortage of supply of the foreign currency.

Today no one can make a real forecast what can happen in fall of this year. But there is a significant factor that gives an important hint.

Here is the chart of currency interventions of the National Bank
from 2012 in April 2014 (million USD).

In 2009, foreign currency reserves have given drawdown. Why?

In November 2009, according to former Finance Minister, Veaceslav Negruta:
"We have the bitter experience of 2008 when the National Bank to demonstrate the stability of the exchange rate of Moldovan leu spent 600 million dollars from the foreign currency reserves of the state."

In 2009 in April parliamentary elections were held and early elections in July. In situation of political instability the National Bank was forced to support the exchange rate, taking off the currency market.

The parliamentary elections will be held this year. The National Bank, as it seems, has reserved a sufficient amount of currency. The only question is to what extent they are ready to support the exchange rate of Moldovan leu.