T-Bills market: The Ministry of Finance is chasing for money, investors - for profitability. Both should be ready for any scenario. 25.01.2016


In December 2015, the Ministry of Finance has placed at the primary market, a record amount of state securities - 816.2 million leis (US $ 40.8 million). Placing this amount allowed it to ensure positive result for the budget- 243.2 million leis.

Initially, the budget in 2015 planned to provide 600 million leis, which the Ministry of Finance had to use to finance the deficit. However, the situation in the country has made its own adjustments. The National Bank began to sharply raising the refinancing rate and leis reserve requirements for the commercial banks. 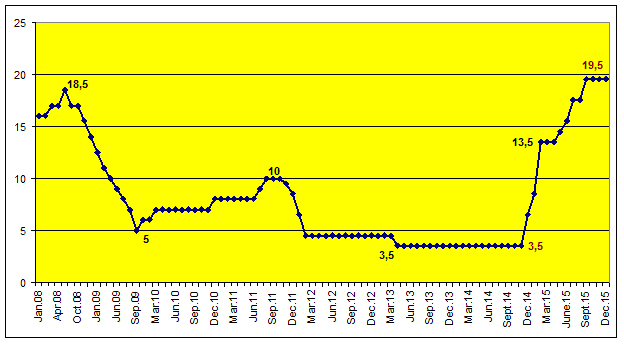 At the same time - less than during one year, the NBM increased by 2.5 times reserve requirements on the funds attracted in MDL for the commercial banks.

Thus sterilizing the money supply, the NBM set specific goals: control of inflation, including by the reducing the pressure of the lei mass on the exchange rate. However, for the same reasons, the banks, which are the major investors in the T-bills market, faced the lack of the available funds. If the Ministry of Finance in January transferred to the budget of 164.4 million leis, in February, March and April, paying off current obligations, it withdrew from the budget 427.8 million leis. For 4 months, the lack made up minus 263.1 million leis. Then were registered four positive months, but this result was completely leveled to the disastrous September (minus 487.3 million leis): as the NBM raised the reserve requirements to the record figure of 35% and the base rate - up to 19.5%.

Dynamics of the Ministry of Finance budget transfers of the funds received from the placement of the state securities at the primary market in 2015 (million leis). 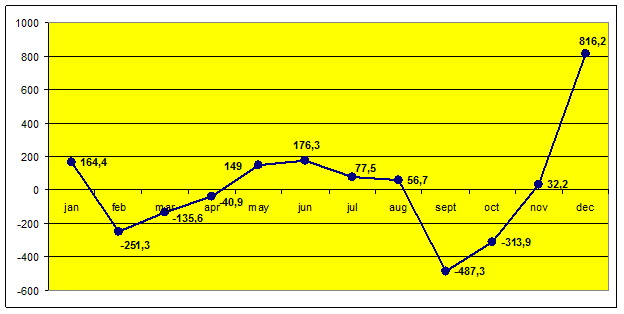 This situation has led to the fact that the Finance Ministry had to prepare and the Government and Parliament to make changes to the state budget, which reduced the amount of incomes from the sale of T-bills from 600 million leis to zero.

To do this, was a difficult objective for the Ministry of Finance: within the first 11 months for the repayment of current liabilities was taken 573 million leis and which the Ministry of Finance had to return to the budget until December 31. It was unbelievable that this task is doable. However, the plan was even exceeded.

December was a Pyrrhic victory for the Ministry of Finance. In December, the return on T-bills amounted to 24.76% p.a.- with the an annual inflation rate of 13.6%, the benefit for the investor is obvious, and guaranteed by the state. In September, a very high rate of 23,51% p.a. did not help the Ministry of Finance due to the shock suffered by the banks after NBM set the rate of 19.5% and regulated norm of 35%. Under the threat of failure to timely new regulations, money on TI-bills market in September, were not included.

Three months later, the situation has stabilized and buying T-bills banks have become not only profitable, but also feasible. It seems that on the New Year's Eve investors put into state securities almost all free tools and this is understandable, given the traditionally very sluggish business development in January and the ongoing political storm, nailed to the bottom of entrepreneurial initiative.

If we speak about T-bills the return on securities, in its dynamics is hitting record lows in the effort to get to market resources that are so necessary to the state budget in the uncertain times. At time when the revised 2015 the revenue part of the budget provided 150 million euros that Moldova had to receive from the Government of Romania and the loan due the political crisis was issued, the Ministry of Finance must do something to deal with this problem. One of the tools designed to do this is the market of the primary T-bills placement. 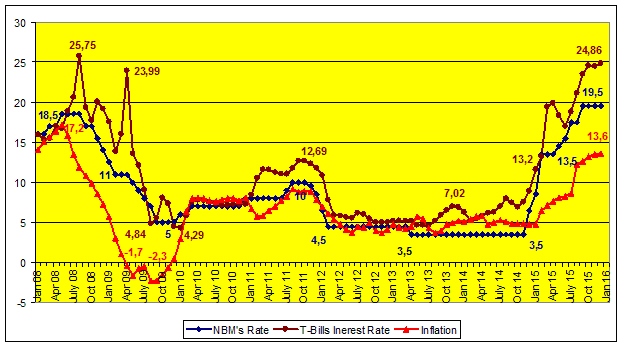 Regarding 2015, the average return on securities was about 10%; moreover, guaranteed by the state. The dynamics of these indicators in the last year is as follows:

Dynamics of the NBM base rate, Return on T-bills and inflation 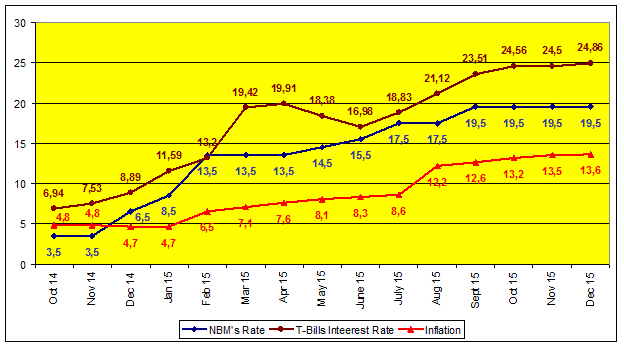 Currently, Moldova bases on the budget of 2015, with specifications adopted in autumn. This means that for the year the Ministry of Finance should have zero indicator during the placement of TI-bills at the primary market. However, the budget needs money, especially in the first months of the year, so sales are going on.

The banks are interested in purchasing state securities: they somehow can compensate the lost profits from the fact that 35% of the borrowed funds in lei forced to freeze the accounts in the National Bank.

State securities are the only Moldovan tool for the short-term liquid investments. The economic stagnation, increased political crisis, domestic investors, not only banks, very willingly will buy T-bills. But it is important to understand that the Ministry of Finance will have to borrow money to pay the high return rate on securities, which reaches 27% p.a. Due to the high rates the volume of the placed securities is growing faster. It is important to understand in what amount securities will be issued, as almost every year the Ministry of Finance by autumn is preparing changes to the budget in order to bring the actual state of affairs at the T-bills market within the legal framework. Investors also need to monitor the situation in order to be ready for anything.

But not only the investors should worry. The current rate of return on T-bills is much higher than the average rate on the loans granted to commercial banks. It is rather expensive source of funding for the Ministry of Finance. In addition, it is necessary to serve the internal debt and the cost of its maintenance must be included in the expenditure part of the state budget.

In the recent years, the rate of increasing of the internal debt via sale of T-bills has greatly increased.

Dynamics of transfers to the budget from the initial placement of the state securities in 1999-2015 (million lei). 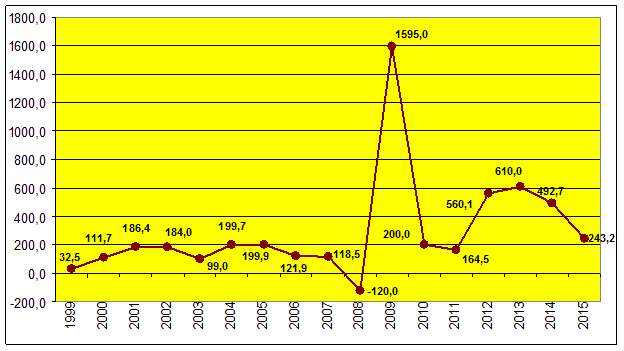 The internal debt on T-bills is not reduced, and as of early 2016 it exceeded 8.1 billion leis- these are T-bills in circulation that the Ministry of Finance should not only repurchase but also to ensure the payment of the interest on them.

Dynamics of increase in the internal debt of Moldova via sale of T-bills at the primary market in 1999 -2015 (million lei). 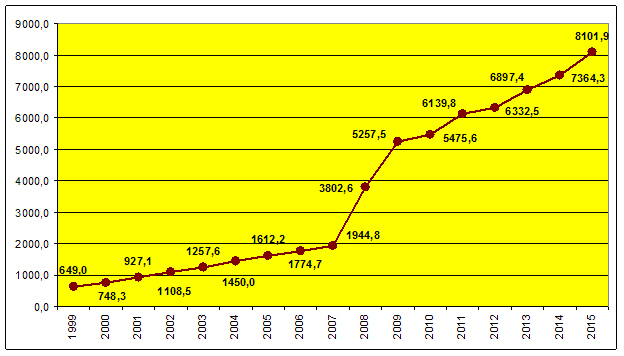 By raising the refinancing rate up to 19.5% and the reserve requirements up to 35% NBM intended to curb inflation, but in doing so, it has damaged the state budget. The Ministry of Finance shall understand if it is justified to attract funds at the T-bills market with high redturn, which should be served. Moreover, this relates to the medium-term securities: at the auction, which took place on January 12 this year, the Ministry of Finance has already placed 117 million leis at 26.53% p.a. under securities with circulation term of 364 days, and in January 13 issued state bonds with circulation term of 2 years for 1.3 million leis at 24.89% p.a. with semi-annual interest payments. The long terms of securities circulation prove that even now the situation may require more rapid adjustments. // 19.01.2015 - InfoMarket.