Weird 2020: humility, depression, rebellion, accepting a new realityThe Hunger Games of the foreign exchange marketData about the Activity of Moldovan Commercial Banks on October 31, 2020How to tame liquidity?Veaceslav IONITA: The government killed the business, but flirted with the populationIs it possible to combine the health care of the nation and budget revenues from bad habits?People and Business: Natural and Unnatural SelectionAlexandru BURDEINII: Being ethical becomes vital in business nowadaysValeriu Lazar: The biggest stupidity one can do now is to fire peopleMarin CIOBANU: We are creating opportunities for business development in Moldova, not only in free economic zones2019: three steps forward, two steps back.Plamen MILANOV: 13 persons became millionaires in Moldova within a year due to the lotteryVictor SHUMILO: The sale of hybrid cars exceeded the sales of cars with traditional fuels in 2019."Bewitched by the "Annus Mirabilis". The main events of 2018 Trucks will be able to cross the Moldovan border much quickerAbout the "second coming" and control over the banking system of MoldovaPrivatization of Air Moldova: 2000 vs 2018. To find 10 differences!The Head of USAID Office in Moldova Karen Hilliard: "We promote the idea that winemaking and tourism are integral whole"The Secrets of the Moldovan Foreign Exchange Market - 2017 15 years of leasing business in Moldova: through diversification to expansionMoldovan Leu vs Geopolitics. How does the currency rate interplay with government, entrepreneurs and world’s processes?10 years ago construction of the Trans-Oil terminals in Giurgiulesti port startedDoes it take $200 million out of consumers' pockets to implement European Directives? Who protects the new edition of the law on internal trade?State Securities Market 2014-2016: The Ministry of Finance calculates the losses, investors - income.It will affect each and every one and you won’t find it funny.A careful attempt to pass the dead zoneT-Bills market: The Ministry of Finance is chasing for money, investors - for profitability. Both should be ready for any scenario.The money that can be washed…Phoenix with the Arab capitalMoldova’s Key Macroeconomic IndicatorsPrices at filling stations

International payment systems - VISA and MasterCard have been firmly settled in Moldova. It was not their own desire to expand their presence at the market of a small country, but rather the contrary - progressive Moldovan banks persistently invited them to go to the market and tried hard to become attractive.

The mid 90-s. The National Bank put into circulation the national currency. On July 27, 1995 the laws on the National Bank and financial institutions - these are legislative acts, with some modifications and additions which today define the rules of the game in the banking market of the country, which came into force.

The National Bank tries to introduce international standards - including promoting the idea of development of the non-cash payments. But the National Bank was acting in the interest of commercial banks. Very few people from inhabitants thinks about it, but cash carry enormous costs for the Bank collection, transport, conversion, and rejection. Calculations show that banks sometimes spend up to 4% of the amount of cash only for its maintenance. Of course, these costs are borne by the customer, but the customer shall optimize expenses, including through the transition to the use of Bank cards.

By the way, the present reality shows that China has its payment system and the political situation forces Russia also has its own system. But Moldova has other scale.

In 1996, after a long work and considerable well-known commercial bank releases the first Moldovan VISA card. After some time MasterCard appears at the Moldavian market.

In 2000, eight commercial banks introduced a MasterCard on the basis of another, single processing center. But local companies on the promotion of the national payment systems do not stand still.

By 2005 four systems of cashless payments by means of the Bank cards - two local - closed MoldCardSystem and club card Unicard, and two international VISA and MasterCard operate in Moldova.

In 2005 the cards were issued and accepted by 12 banks of Moldova.

In general presence of a bank card for the state and the system of cashless payments is primarily greater control over the cash flows, and therefore a lot of confidence in tax payments and stability of revenue to the state budget. All countries are committed to reducing the share and role of cash. To do this, restrictions on certain types of payments were imposed- for example, in some countries the tickets can be purchased only via credit card.

On this background the international payment systems are rather prosperous at our market. At the same time, as competition at the banking market is very hard, one big bank could not afford to work via the processing center, if another large commercial bank is involved in this process.

Not international payment systems are interested in or clients but our banks, which find measures to optimize and reduce the service of cards.

Today there are the banks that work only with VISA or with MasterCard only with those who work with both systems. But existing 14 banks work with International Bank cards.

Undoubtedly, one of the most powerful impetuses for the development of card business in Moldova is so-called salary projects. A very strong argument when withdrawing money at the cash desk of the bank in cash wage is 0,9-1% of the amount, and the salary project offers 0,3-0,5%. So the company and the bank benefit from this operation.

For 18 years the volume of the existing banking cards, issued by Moldovan banks is growing by leaps and bounds- only for the last decade the volume of cards increased almost 3 times.

The number of bank cards issued in Moldova in circulation in 2005-2014.

Here is specified the number of cards based on the new issued and withdrawn from circulation - i.e. the numbers reflect the actual number of the valid cards.

Dynamics of transactions on one Bank card.

This means that Moldova is prevalent rather one-time use of the card in a month - that is the majority of card holders’ just monthly removing from the ATMs their salary or pension. As if this is not something to dream about the banks, the government and the payment system.

But the country continues to develop the network of the points of reception: ATMs, POS terminals, and imprinters.

The number of payments transactions per one card a year. 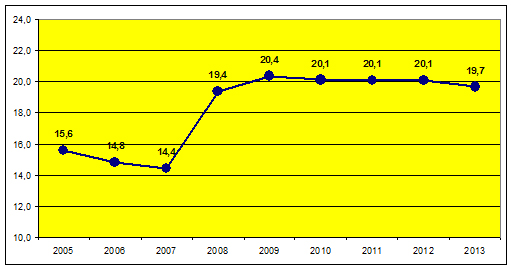 From 2010 an approximate measure of the number of readers’ devices per one card will be on average100 issued cards.

In general, the developed banks, payment system, client outreach of course increased and significantly; the maximum of which was achieved - salary projects. Customers are still very rarely resort to the use of cards in everyday life, preferring cash it operations are to use ATM.

But not because they do not want to pay cards, but because they often face the situation when the card at the service point is not accepted.

However, against the background of the number of card transactions the greatest interest is represented payment accounts for retail operations.

Dynamics of growth of the number of readers’ devices in Moldova. 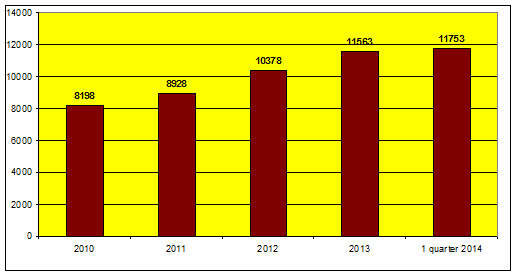 Dynamics of transactions per one banking card. 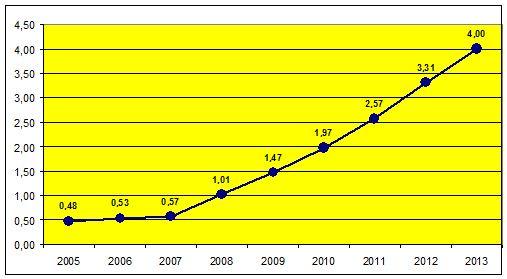 When traveling outside of Moldova, we immediately become Europeans. Traveling with a card it will be safer than with cash. In addition, cash withdrawal abroad is very expensive. The transactions in the 1st quarter of this year has amounted to 18% of the total number of card transactions, abroad this indicator exceeded 90%. 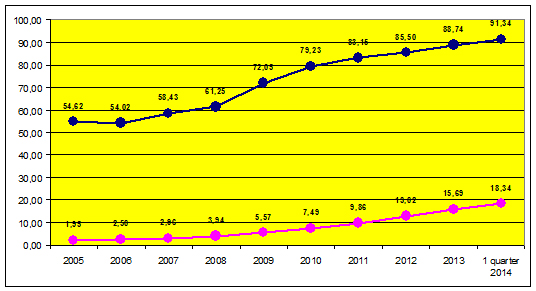 In economically developed countries this indicator reaches to 230. In Sweden each card issued in 2012, on average 230 times - that is, two of the three days was used as a means of payment.

How we look at the background of Europe on this indicator (data of 2012).

That's how we look at the background of Europe is a big strive. On the European background of Moldova in terms of payments by cards is just in the Stone Age. If we assume that each of the modern people should average two cards - one debit and one credit is the number issued in Moldova cards should increase twice and even three times.

All should understand this both the banks and the state. In September 2013 recently the National Payment Council on recommendation of international financial organizations, also sees that payments in Moldova are not very willing to move into the cashless sector.

Among their tasks, the Board aims to promote cashless payments in which the card settlements occupy a special position.

The increase in the non-cash payments for the banks means lower costs for the state control over the cash flow and improving tax collection. As confirmation of this fact under the Statute of the Council the document was signed by the chief of the General State Tax Inspectorate, though the Inspection Board has not entered in composition of the Council. The Council is now in its third quarter and is the place where the participants of the non-cash market exchange opinions: what else can you do to minimize cash payments in Moldova. Unfortunately, the business's opinion on this issue, the Council does not yet represent.

In 2008, the law on entrepreneurship and enterprises, article 7th, which obliges companies, with a turnover, installs POS-terminals. Graphs show the growth of the non-cash card payments from 2008. And since 2012 in the new wording of this article reads (quoted with reductions):

Starting from July 1, 2012, entities ,sales volume , exceeds 2 million lei within the one are obliged to 1 July of the following year to install POS terminals and to ensure the possibility to make payments from their use in units where sales exceeded 500 thousand lei.

It is normal that small businesses resists installation of POS-terminals, and the reason here is not only an attempt to escape tax in our country is very strictly relate to the cash registers and issuing checks every time, even lei purchase - reason of the refusal of work with banks on POS-terminals in the fact that the Bank takes 2-2,5% from the sum of the deal for its services.

Maybe not the highest payment for major outlets interested in providing the client with the possibility to pay in any form; but very painful, for example for small bar or corner shop, where the competition is very hard and fights for every lei.

It turns out that the banks on the one hand are interested in the increase of non-cash payments, seeking immediately to compensate for their losses at the expense of economic agents. In the end we have only 20 operations per year on a single card that is not enough to cover the Bank's costs, even at the ATM services.

Cash is extremely concerned about the developed countries such as the US and the EU, and the EU Moldova sooner or later will come. Cash is an unverified source of their origin. Therefore, countries impose restrictions on those or other actions, stimulating controlled by non-cash payments.

It is necessary to change the mentality and everything: banks, the state, and business and consumers will be tightened.

If we assume that each of the modern people should use two cards - one debit and one credit one- the number of cards issued in Moldova should increase twice and even three times.

The increase in the non-cash payments for the banks means lower costs for the state control over the cash flow and improving tax collection. As a confirmation - under the Statute of the Council its’ signature was framed, although the Inspection of the Board has not entered its interests represented by the Finance Ministry.

May be not the highest payment for major outlets interested in providing the client with the possibility to pay in any form; but very painful, for example for small bar or corner shop, where the competition is very hard and fight for every lei.

We have intention to strive for. If we assume that each of the modern person should have two cards - one debit and one credit, so the number issued cards should increase twice and even three times.