The National Bank has more instruments for maintaining the level of inflation. But devaluation and revaluation of the national currency directly affects the inflation rate, as well as vice versa.

We started with the fact that in November 2011 the National Bank in four installments for four months has lowered the base rate from 10% to 4.5% p.a.

In 2008, when Europe and the US has been already attacked by the global economic crisis, Moldova only prepared for its consequences. 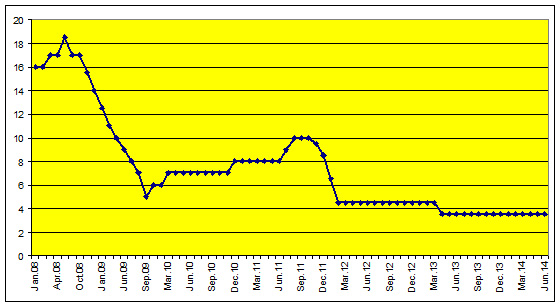 In September 2009 the base rate achieved its historic minimum of 5% p.a. Such drop – by 3,7 times must have its grounds.

Will the National Bank preparing for the current crisis?

Reducing basic rates is reducing the credit burden on business. On the other hand no one wants to take new loans.
In 2008 until April 2009, the interest rates on T-bills were so wasteful to the budget - from 15% to 23% p.a., and in these conditions any commercial Bank will place its funds in the liquid state bonds.

Banks with liquidity send resources into highly liquid segment – to the state T-Bills.

Realizing this, the National Bank takes a sharp decrease of the basis rate - as it is to this rate T-bills is tied. Money goes to STO with the lower rates. 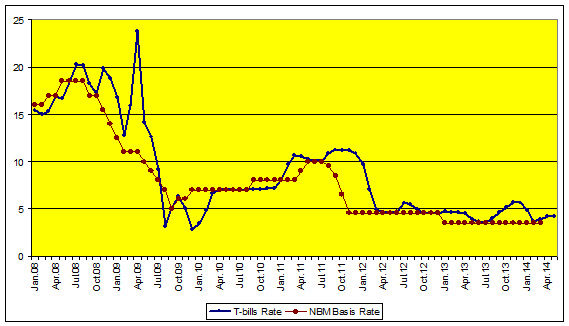 It should be noted as the rates on the STO fell - directly reflecting the decrease in the base rate, shown in the previous chart.

That clearly indicates the direct dependency rates on T-bills bills from the base rate of the National Bank. So, these are the reasons of the sharp reduction of the basic rate in 2009.

Therefore there are certain laws of economy which have the opposite effect in crisis conditions. 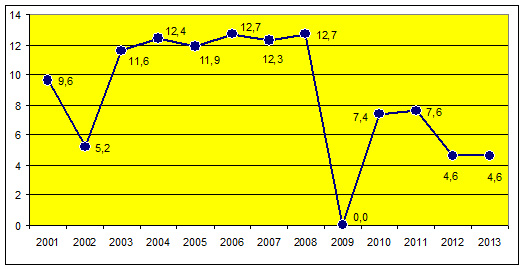 According to the results of 2009, inflation in Moldova amounted to zero, as compared to 12.7 the year before.

We can remember the end of 2011 – when the National Bank reduced the interest rate- from 10% in November to 4.5% in February 2012. The national Bank accepts the strategy not to reduce the level of inflation, and hold it in the hallway at the level of 5% p.a. plus or minus a half percentage point, as inflation was forecasted at 7.6%.

In 2008-2009, the National Bank reduced the base rate - it primarily prepared for the crisis, namely tried to create a "safety cushion" for the economy, part of stagnation, as the low base rate stimulates low lending rates and should lead to the development of the economy.

Let's look again at the diagram of dependence of rates on the T-bills to the base rate.

There is a gap between the crisis of 2009 and 2012. Four years ago it was justified by the impact of the global crisis, but what are the reasons of 2012 crisis?

Since 2012, the National Bank started to hold a strong currency intervention by buying foreign currency and thereby increasing lei mass. This practice was been held in 2013, that ultimately put pressure on the leu rate.

On the one hand, the National Bank shall keep the inflation rate, and have made serious efforts to exit a double-digit index in 2003-2008. But after 2009, when inflation has fallen to zero, the National Bank changed its priorities, and now it does not hold inflation, but vice versa it creates it. In 2010 NBM planned it at the level of 7.7% p.a., but in fact it made up 7.4%.

Only after two years from 2012, the National Bank has established the border of inflation at the level of 5%, assigning the corridor of plus or minus one and a half points. 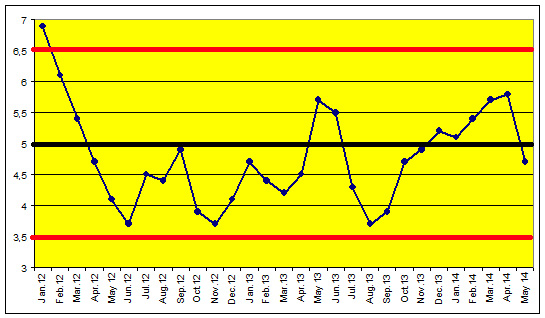 It turns out that since February 2012, the inflation rate is set at 5% plus or minus a half percent - that makes from 3.5 to 6.5% p.a. The graph clearly shows that inflation is set by the National Bank of 5% - that is an inflated figure. It was required to make adjustment of 3.5 percent, plus or minus one point.

In order to keep inflation in a given five-percent corridor, but seeing trends of economy, the National Bank resorted not to adjust their forecasts and to currency interventions, with the aim of keeping inflation within the set corridor.

At the same time it happens against the background of a low base rate, which the National Bank in April 2013 reduced by one point to 3.5% p.a.

Due to these intervention became the starting point on the path that led to the subsequent devaluation of leu.

- Low base rate - loss of investors.

- No high interest rates on loans and deposits.

- Devaluation of the Moldovan leu.

Our inflation rate is defined as 5%. In EU countries the rate is 2%. In 2009, when several EU countries outside the Euro-zone, has decided to devalue its currency, the European Central Bank spoke about this as:

“The ability of some EU countries to devalue their currency with the purpose of obtaining economic advantages threatens the integrity of the common market". Then this statement was applied to Poland and Hungary, which devalued the currency by making their goods to the European market making them more competitive in the first post-crisis year”.

Moldova is highly dependent on the imports deliveries and is not yet able to provide itself with energy sources.

The economic truth suggests that high base rate slows the rate of inflation, as it provokes more expensive loans. But otherwise the country is becoming more attractive for investors, which raises the demand for the national currency. If vice versa - low rates shall stimulate growth, but the country is losing investors and reduces the demand for the national currency.

The National Bank has also reserves and wind to repay the fluctuations of the rocking of the boat of the exchange rate, and it should take advantage of it. Otherwise its main goal – is inflation – it should decide this problem.

If the rate of leu will exceed 14 lei per dollar, currency devaluation will not stop. As it is seen the last time, demand prevails over the proposal.

In one large currency cash exchange office my good friend this week said that now there are no problems to sell the currency, there is a problem to buy it….

Draw your own conclusions.