The new president of the National Bank of Moldova Sergiu Cioclea, who took the office on 11th of April 2016 is included in the swing of things, he continues the policy of his predecessor. In late April, National Bank Executive consignor under his leadership made ​​a decision about the next reduction of the base rate by two percentage points - from 17% to 15 % per annum. What is the purpose of National Bank, reducing the base rate only, while leaving the reserve requirements on deposits attracted by banks in MDL at the level of 35 %?

Since the end of 2014 to September 2015 the NBM decided the main issue of his mission: containment of inflation. Among the main measures for the stabilization of the exchange rate it was necessary, and the regulator took measures to launder the whole amount of lei. In less than a year - from December 2014 for September 2015 - National Bank raised the refinancing rate from 3.5 % to 19.5 % indecent, and reserve requirements - from 14% to anti- record 35 %. As a result, the rate stabilized, however, stopped along the already frail business environment with him.

So here is a simple example, more than half of the revenues in the state budget provided customs activity - that is, the export-import operations.

The MDL year revenues from customs increased slightly, but the national currency devaluation points to a significant reduction in the export-import activity: in comparison with I quarter of 2014 fell by 26.7 % this year. This is not an indicator, to put it mildly, reduce business activity?!

Let us go back to the financial sector. At a time when the National Bank launder lei amounts, raising the stakes and rules, banks tend to attract the free market resources through deposits, taking them to higher rates – up to 19 % per annum. However, business agents unable to borrow loans at such high rates. There is a must to do something with the money, it is good that in the country of permanent political crisis that resulted in freezing of all international financial projects, it will always be the one who really need the money - the state budget. If money is on demand, there is no much bargain for them, no one will, at least in short term.

At a time when rates are extremely high, free money is not much, and the state budget is experiencing a severe shortage, the most interesting and reliable investment object became state treasury bonds. Attracting funds at rates up to 19 % per year, commercial banks are happy to place them in T-bills at rates reaching up to 26.5 % per annum! Why lend to the business, if the state already provides comfortable 5-7 percentage points of return on borrowed money?!

Dynamics of the NBM base rate and the yield of T-bills for the period: October 2014 - April 2016, monthly 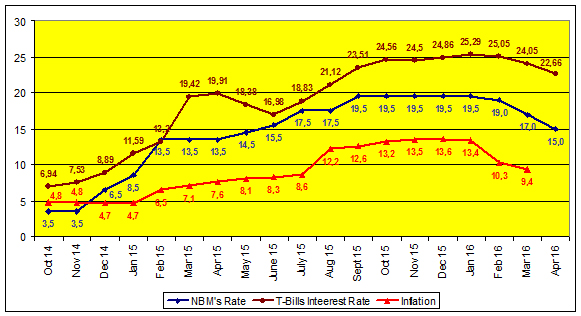 In other words, the National Bank solving their problems has forced the Ministry of Finance and state budget of the whole country to pay for their solutions, quick and very expensive.

In order to mitigate the consequences of their actions, starting from February 2016 National Bank began a gradual decline in the base rate: from 19.5 % in January to 15 % - at the end of April. Thus, given the market signal - rates should be decreased, including (or even primarily) on T-bills. However, the rate of decline in government bond yields much smoother: from a peak of January, when the average rate was 25.29 % per annum, it dropped to 22.66 % in April (when the base was already 17 %). Since the beginning of May the base is set at around 15 % per year, you can expect a decrease in the yield of T-bills by at least two percentage points.

However, there is another component of the government bond yields - the amount of their issue. While the National Bank increased the base rate during 2015, moreover, reserved requirements, the commercial banks sought to free resources to meet these requirements and they didn’t take advantage of T-bills market. This led to the fact that by 1st December of 2015, meaning the first 11 months, the Ministry of Finance did not fill up the gap of budget deficit from the sale of T-bills, on the contrary - bought them from the market in the amount of 572.9 million lei! In the original version of 2015 financial plan from the sale of T-bills it should have been funded 600 million lei in the state budget. The Ministry of Finance (later the parliament) observing the lack of demand on the bonds has corrected this figure, defining a zero rate for the year. What happened in the end?

Replenishment of the state budget from the sale of T-bills in the primary market in the years 2015-2016, monthly (mln. Lei) 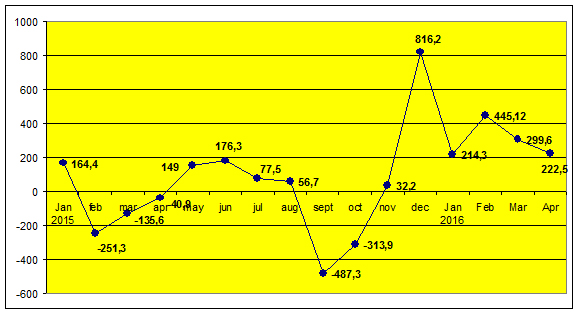 In December, when banks have settled down to the account of the race to fulfill reserve requirements and the pace of fund-raising of the market has already been defined, on the eve of the "dead " in terms of business in January, free resources poured into T-bills market. Ministry of Finance was happy to place securities to 816.2 million lei and it is only during the past month!

The pace of sales of T-bills has been saved at the beginning of the year. The budget from the sale of T-bills in 2016, in the primary market, must be received 200 million lei, Ministry of Finance sent to the budget 1.184.600.000 lei within 4 months! Now – there is only one option to buy those bonds so to reach the established scope of the bill or to change completely the financial plan. Decisions of the National Bank, political instability and the needs aligned with the budget forced the Finance Ministry to borrow money at very high interest rates. Service activities made to resolve the domestic debt, was a very heavy burden for the country, which has, to put it mildly, weak economy. Moreover, the high prices of bills will lead to financial expenses for many years: the Ministry of Finance sold two-year bills at a rate of up to 24.96 % per annum; and 12 months - 26.49 % per annum!

That is, even the market to buy the paper at the right price now, "investors" will have to pay a higher yield at least two years. There is, of course, another possibility of the sharp devaluation of the national currency to make it easier for the budget, but it may lead to complete collapse of the economy and business environment.

How long will it take for the National Bank, Ministry of Finance and the government to come anywhere close to those figures they were performing eighteen months ago? In October 2014, the base rate was 3.5 % per annum; reserve requirements - 14 %; weighted average yield of T-bills - 6.94 % per annum; the annual rate of inflation - 4.8 %. The national currency rate amounted to 14.67 lei per dollar, of course, making certain actions, stabilization and impulses for development can bring positive results. Alas, not fast. Although the inflation rate by the end of 2016 already predicted at 5 %. Measures taken by the National Bank are very careful, besides, they cannot be considered comprehensive. On the one hand, National Bank wants to show the market that it is time to reduce the rate and above all it concerns the market for government securities, on the other - does not diminish the pressure on bank liquidity, apparently, still fear that the major amount of lei currency can fade away to the foreign exchange market.

Speaking of currencies, NBM activity in the foreign exchange market in the last year cannot be considered active. After the collapse at the end of 2014, the National Bank seeks to bring a level of reserves back to standard. The situation by the end of April is $ 1.82 billion, despite the fact that the absolute record of foreign exchange reserves of the National Bank was established in December 14th of 2013 which was $ 2.83 billion. 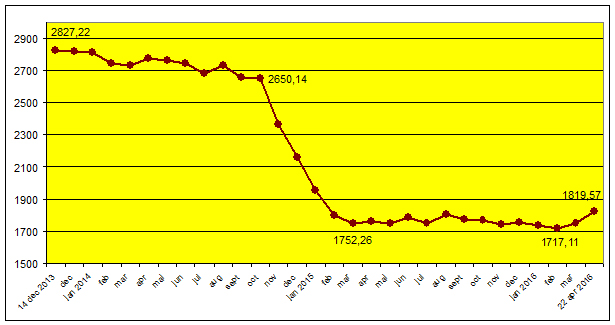 The main foreign exchange intervention of the National Bank occurred in the period between November 2014 - February 2015 within 4 months. National Bank sold the currency from reserves to the amount of $709 million. 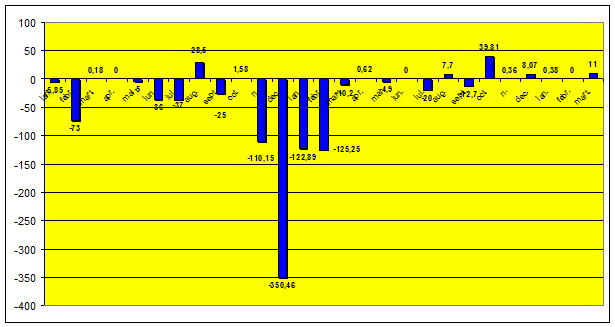 As you can see, National Bank does not play any significant role either in the currency market in the last year. The only outstanding event was the acquisition of $ 39.9 million from Foreign Exchange market in October 2015. NBM balances, holding the course at the level of under 20 lei for $1 most of the time.

Summarizing, the National Bank has neither the money nor the desire to drain reserves in the currency market in order to maintain the course. Since the situation remains very volatile, the National Bank has no reasons to reduce the reserve requirements on deposits attracted by commercial banks. Reducing the base rate is a signal to the to reduce the cost of servicing of the domestic debt and revive the economy with a bit of credit at reasonable rates. Now, if the National Bank will credit the banks declared their base rate - then, perhaps, its value would be of importance for the financial market. Defining a basis shall not be obliged to lend on it because of the regulator. It turns out that this rate has become a kind of abstract and index information.

In the meantime, the new president of the National Bank enters into the swing of things and reviewing the legacy of predecessor (we will not yet give any assessment or other); until he gains experience with foreign colleagues, apparently the policy of the National Bank in the coming months will continue to be the same as previously. This is actually the good news: at least, there is no reason to expect any sudden changes from the regulator, which means it is already possible to plan something ... so far for a very short period of time. // 05.05.2016 – InfoMarket.