Since the end of the last week after the publication of  fiscal policy law for 2016, the Ministry of Finance has consulted with the business communities to find out their opinions. Minister Octavian Armasu admitted that the fiscal policy law for 2016 was prepared by the previous government and  there were only minor changes made. The project mainly involves the traditional increase of the taxes costs on excise goods. The increase of the taxes performed by the government annualy, taking into consideration the escalation. The  document looks quite smooth at first sight but there are moments that really attract attention and cause ambiguous questions.

Let's keep in mind that from 2012 pure grape wine in Moldova is not an excise commodity, that has been done to promote sales and consumption of wine within the country.

It has been revealed to the agency InfoMarket that excise attack on beer (and on its manufacturers, retailers and consumers) expresses evident interest and desire to make the alcohol market suitable for some manufacturers. The interest expressed not the first time but such a cold act of aggression  indeed a premiere for Moldova .

In addition, the increase of excise tax on beer does not mean those measures bring a revenue to the budget from the sale of beer.
Romanian media noted that the Bucharest government has reduced the excise tax on beer in 2016 if convert to MDL from 1.87 to 1.6 per liter, i.e. by 14.4 %. The decline in prices conditioned by reduced consumption and production of beer in Romania over the past few years.

If we recalculate the amount of excise taxes in neighboring countries Romania and Ukraine in MDL (at a current exchange rate), it turns out that Moldova has the highest excise tax rate on beer in the recent years, needless to mention its increase in 2016.


Excise tax per liter of beer (in MDL) 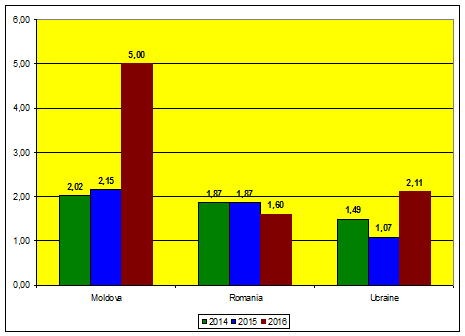 In European countries excise taxes are different. According to the official sites of the European Commission and the European Association of beer producers, the average excise tax in 27 countries of the EU for a liter of beer was 0.0703 euro in 2015 which is 1.58 lei,  based on the Moldovan currency rate. The meaning is the Republic of Moldova had higher excise tax rate than European average excise tax was, until 2016. Probably, there are more well paid people in Moldova. Scandinavian countries and island countries which are the UK and Ireland have a strong impact on the European statistics. Many of those countries have state monopoly on alcohol and very high duties and excise taxes on alcohol. The lowest excise tax in Europe is in Luxembourg which is  0.033 euro cent (0,75 MDL) but in Spain excise tax for wine is about 0.08 euro cents (1,8 MDL).

Here are the comparisons for beer and spirits excise taxes, using a common formula for calculating the excise taxes on strong alcohol (in MDL) 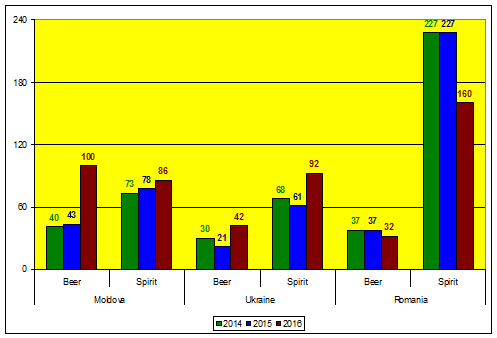 Publication of fiscal policy for 2016 has been introduced as an advantage that is truly not, it was said: there were small changes made to the law to improve the situation on the market. However the truth is that the situation is quite opposite, especially for Moldovan beer producers and consumers.

The market of alcohol in recent years is falling but the government in its decision to increase the excise tax on beer by 2.3 times just sticks a knife into it. Namely:

- Beer business is discriminated in comparison to other alcohol producers.
- The amount of the excise tax on beer in Moldova is higher than European countries  average tax rate and even higher than in "wine cultivated" Spain.
- Applying a unique formula for calculating the excise taxes on all alcoholic beverages, the volume of alcohol in beer became the most expensive, while in EU it is considered that the volume  of alcohol in beer was three times cheaper than the volume of alcohol in spirits.
- High excise tax on beer stimulates the growth of smuggling and reduction of beer production which will not give revenue to the budget.
- If the purpose is promoting wine consumption market by increasing beer excise tax by 2.3 times, it is unlikely to be achieved as the beer considering its low alcohol by volume will be less accessible than, for example, vodka.

It is quite reasonable that the winemaking in Moldova has ceased from being the wine of excisable goods since 2012. This factor has lowered wine's cost and encouraged Moldovan winemakers. Manufacturers of other alcoholic beverages (except beer) remained in usual or equal competitive conditions in comparison to winemakers. However, the beer industry is killed now.

The Ministry of Finance announced the start of consultations on January 29th, upon that the minister Octavian Armasu has proposed to business structures to discuss the fiscal policy law promptly, due to lack of time. If the announced consultation with business structures is not a mere formality, that period of time should be sufficient to ensure the Ministry of Finance to take into consideration the legal interests of the beer producers and consumers, in order to avoid the discrimination in the final version of the fiscal policy law for 2016. //05.02.2016 – InfoMarket.