The comments of InfoMarket agency

It may seem that the National Bank is strengthening the national currency, as if trying to keep the leu’s rate to the euro in the range of 21 lei for 1 euro (plus or minus 0.5 points). After all, the graphs show the relative stability of the euro exchange rate since the beginning of the year. However, it is not. It has been repeatedly noted that NBM quotes only the US dollar (the other currencies (including Euro) quotation is made at the cross-rate of 14.00). Leu started the way to its strengthening since January 2017, it strengthened in relation to both currencies until May. However, the US dollar began to weaken significantly since May at the international markets and the paths of the two currencies "diverged": the ratio of the Euro-Dollar pair was 1.05 in January; and the gap had increased to 1.20 by September. That is, the euro strengthened against the dollar by 14.3%.

Thus, taking into account the specifics of the exchange rates in Moldova, the National Bank does not directly affect the Euro exchange rate, the Moldovan leu is strengthened with the fall of the dollar (in the world). However, there is a reason to believe that the rate of leu against the dollar is not very fair.

The below chart clearly shows how the NBM, as it were, "holds" the euro rate in the range of 21 (+/- 0.5), while strengthening the leu against the US dollar for the last 12 months (the bold dot indicates the beginning of 2017, namely: January 7).

The dynamics of the exchange rate MDL vs EURO compared to MDL vs. USD 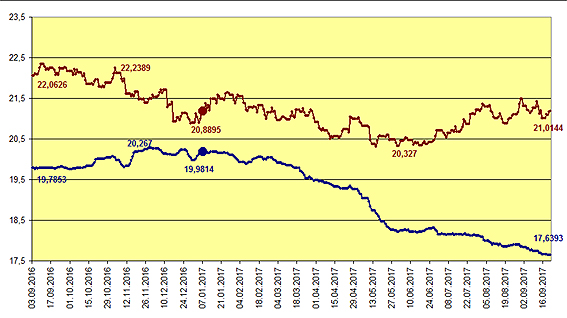 It is necessary to increase foreign exchange earnings to the country in order to strengthen the national currency. There are two main sources of income in Moldova: Individuals and exports. There are still numerous grants, as well as foreign investments but their share is, firstly, unstable and secondly, insignificant for the market.

There are performance improvements on incomes from individuals in 2017th in comparison with 2016th, but only at the level of 2015th.

There is an increase in the currency to Moldova from another source - exports. The volume of Moldovan exports in January-July 2017 increased by 13.9%, compared to the same period in 2016, amounting to $1 billion 219.9 million. The exports grew a year earlier: according to the results of 2016, it grew by 4%, compared to 2015, amounting to $2 billion 045.3 million. The leu's strengthening was not noted during last year.

Returning to the data for 7 months of 2017th, we note that in real terms, the inflow of currency from exports, based on the total volume, grew by only $149 million. So much more currency from these operations entered the country within 7 months of current year in comparison with the same period of the past. Does this currency inflow put pressure on the foreign exchange market? .. it’s hardly to the extent that leu has become stronger.

The currency reserves of the National Bank, to put it mildly, "sank" in 2014-2015, the regulator began to take measures to restore them. It was likely to hit a record $2.82 billion in September 2017, the NBM already "broke" the deadlock of $2.54 billion.

The question is: Why does it takes for the National Bank to keep the increased reserves? This question rose repeatedly. Recommendations of the International Monetary Fund are generally categorical: the National Bank should not participate in currency interventions in the domestic market, leaving it "free-flow". Moldova is a small country, and large single purchases or currency sales can create temporary sharp fluctuations of the exchange rate, so the NBM reserves the right not to admit them. True, it seems to be carried away by buying up currency for reserves. According to IMF recommendations, their size should cover the volume of 4-months imports to Moldova; the National Bank "exceeded" this plan long time ago: the reserves (2.54 billion) at the moment almost cover imports ($ 2.58 billion) within 6 months of 2017.

Foreign exchange reserves of the NBM are replenished from various sources: Currency purchase at the market, exchange rate differences between currencies, income from the provision of reserves, credit lines, revaluation of the investment portfolio and others. The main sources are two: Buying foreign exchange and exchange rate revaluation.

The portfolio of foreign exchange reserves of the NBM as of June 2017 consists of: US dollars - 65%, pounds sterling - 20%, euro - 10%, other currencies - 5%. In this case, the final calculation of the amount of reserves is calculated in US dollars.

Pound to dollar went up by 7.3% within 7 months; euro to dollar went up by 14.3%. These two currencies have increased the estimated reserves of the National Bank of Moldova for 7 months, due to the exchange rate dynamics by $0.06 billion ($0.03 billion each). At the same time, the share of reserves growth due to the exchange difference of other currencies other than the dollar is not quite significant in the general growth of foreign exchange reserves within 7 months of the current year, because the reserves grew by $0.331 billion (by 15%) and this happened mainly due to the National Bank buying currency in the domestic market. The reserves amounted to $2.537 billion as of September 8, 2017.

Dynamics of foreign exchange reserves from 2006 to September 2017th

These calculations are given for the sole purpose to show that the National Bank replenishes its currency reserves mainly due to currency operations at the domestic market, that is, currency retaining.

In the chart below, the entire history of the currency market of Moldova for the last 5 years is being monitored clearly.

- the NBM was already forced to restrain the rate (and inflation) after swinging the market greatly in 2014.

- the NBM sold currency, covering losses associated with the withdrawal of the "stolen billion" in 2015 (at the beginning of the year) after that, the NBM "lied low" not participating in currency operations, which only spurred the devaluation of the leu.

- the NBM began buying currency from the market in 2016, replenishing its reserves, and continues to do so in 2017. 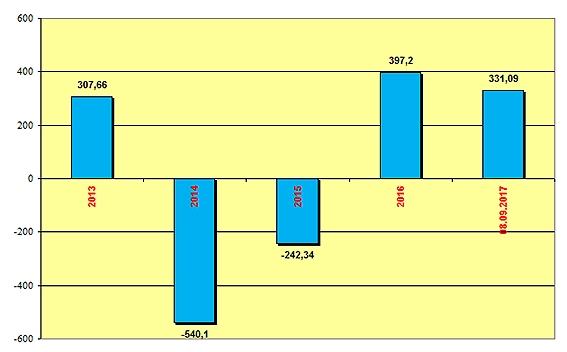 The Moldovan Leu has strengthened at the beginning of the spring in 2017, the NBM began to justify its actions by the presence of an unprecedented currency offers at the market, it has to buy up the currency in order to prevent sharp fluctuations of the exchange rate but it is not very noticeable towards US dollar (the leu’s rate is "hooked" on it).

It seems that the National Bank is more concerned about the fluctuations of the leu between MDL and EUR. That is why there is an opinion that the NBM still "tied" to the relative stability of the leu’s exchange rate towards euro, since the population in the country is mostly focused on the European currency, which in our country creates the illusion of stability of the currency market. It was already mentioned that the fluctuations of MDL-EUR rate are kept at the level of 20.3-22.3 lei for 1 euro this year. 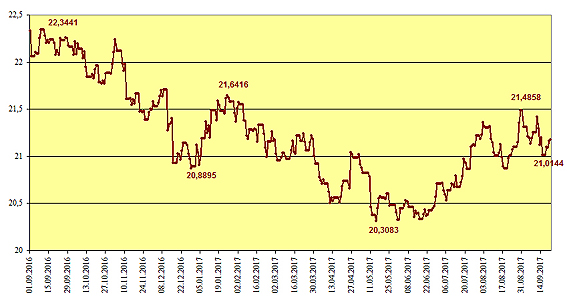 The information has repeatedly appeared that the National Bank is considering the possibility of changing the quotations of leu towards other world currencies. The only pair quoted at the moment is MDL-USD, the other currencies are quoted at the cross-rate, probably, according to the example of some other countries, the NBM will make a basket of two currencies that will influence the final official exchange rate; such rates can be considered more fair. Today, euro is in free-flow and the NBM does not follow its deviation, but it can be avoided in the bi-currency basket and affect the rates of both currencies, depending on the market situation.

Today, it is obvious that the National Bank behaves itself absolutely freely at the currency market, it plays by its own rules. It has not only power but also opportunities to do so, using the same sources for foreign exchange benefits to the country: Individuals and exports. They are not so much this year that this inflow of currency exerts pressure on the leu. Where does the currency come from? Is it foreign investments? Grants? Additional or secret sources?

Let's speak clearly: the country received $656 million from individuals within 7 months and $1.220 million from exports. The National Bank bought $330 million at the market that makes 17.5% out of these two sums. But the country is growing and imports, and hence the demand for currency from economic agents is not reduced also.

Imports to Moldova in January-July 2017, in comparison with the same period in 2016, increased by 18.1%, amounting to $2 billion 578.3 million. Importers’ demand for currency is also growing and it exceeds the amount of currency in the country significantly.

So it turns out that Moldova is a country of riddles, it is subject to some of its laws and regulations, or vice versa? Here is a short dialogue from the movie "Shakespeare in Love" which fits the situation perfectly:

- Nothing. Strangely enough, it all turns out well.

The secret remains: the National Bank having bought $330 million at the foreign exchange market within 8 months for its reserves, but it does not devalue the leu, on the contrary - strengthens it. Although the market supposed to receive about 6 billion lei as a result of the currency operations made by the National Bank, it is already mentioned about 7 billion lei of excess liquidity inside the market at the beginning of the year. Excess of liquidity generates inflation, it is sole responsibility of the National Bank. It is the topic of a stand-alone conversation.

The beginning of autumn marked the consolidation of leu’s position, as, indeed, the euro-dollar pair does not yet show any special fluctuations in one direction or another at the international markets. Let’s make a forecast: There is no need to expect any changes in the Moldovan currency market in the coming months, but its adjustments (in terms of the devaluation of the leu) could be started with the heating season increased by the demand for imported energy resources. Can the prices for energy resources be reduced at the domestic market? After all, both oil products and natural gas are paid in US dollars by Moldova and received from foreign suppliers. But this is not obvious, despite the appreciation of the leu towards the dollar, the prices for oil products do not decrease. The prices for imported goods do not fall, especially those that are tied to the US dollars...

The main question remains: Who benefits from further strengthening of the leu? After all, both the business environment and individuals have become accustomed to a certain "stabilization". The businesses for the most part understand the concept of exchange rate fluctuations. It is also important for individuals to see a relatively stable exchange rate on the panel of exchange offices, and, first of all, leu towards euro (the holders of US dollars have long been "in coma" due to the exchange rate losses). Indirectly, it can be said that, among other things, the NBM also solves the problem of preventing panic in the cash market by making individuals to calm down in terms of "stability of leu towards euro". What is really happening inside the foreign exchange currency market? It is fully managed by the regulator… the rest remains a mystery "locked behind seven seals of the National Bank’s storage vaults." // 21.09.2017 - InfoMarket.